ESPN made a change to their excellent article about Ronda Rousey published last week that has raised some eyebrows regarding the reason.

Some astute readers on the internet noticed that a change was made concerning the timeline of Rousey’s relationship with boyfriend and fellow UFC fighter Travis Browne.

The original article noted that the relationship between Browne and Rousey began in April, months before Browne’s wife Jenna Renee Webb accused him of domestic violence. The edited version stated that they began dating in “early summer.”

You can see the difference in the screenshots below (original on left, new on right):

To follow up on @noochsig's tweet, here's ESPN's editing of the timeframe when Rousey first started seeing Browne. pic.twitter.com/0xpev9ZKdV

An ESPN spokesperson tells Larry Brown Sports that the error was not discovered until after the story was first published, which is why it was later corrected.

Webb posted photos on Instagram in early July showing bruises she says were the result of Browne beating her. Browne denied the allegation, and his manager said Webb was just trying to get back at Browne for cheating on her. When Browne announced in October that he and Rousey were together, it confirmed that Rousey was the so-called “other woman.”

Putting aside the matter of the Rousey-Browne dating timeline, the entire piece by Ramona Shelburne is excellent and well worth your time.

Ronda Rousey has publicly confirmed that she is in a relationship with boyfriend Travis Browne, who is also a UFC fighter. Though we do not know the extent of their relationship beyond it being serious, we do know that the public perception of the relationship makes it complicated.

One of the reasons for this has to do with Browne’s history with his estranged wife.

Browne, 33, was accused by his ex-wife Jenna Renee Webb in July of committing domestic violence against her. She even posted some serious photo evidence.

Browne denied the allegations and was even pulled from a UFC event as the matter was investigated. His manager accused Webb of posting the allegations to get revenge on Browne for cheating on her. The woman Browne apparently was cheating on Webb with was Rousey.

Rousey and Browne became closer after Browne started training with Rousey at her fight club in Glendale last year. Browne confirmed their relationship last month and said they began talking over the summer. He also took offense to people saying they were “dating,” because he finds that to be a childish term for two adults.

After Browne made his comments about Rousey in an interview, she was moved to release a statement on the matter too.

“I don’t talk about my personal life much. That’s why it’s called ‘personal life,'” Rousey told ESPN. “It’s true that Travis and I are in a relationship. I’ve really enjoyed the time we have spent together and getting to know one another. And that’s all I’m going to say about it.”

Rousey has kept quiet on her dating past throughout most of her time in the spotlight. About they only thing she has shared is that she loves to have a lot of sex before fights. She also revealed in her book that she had a boyfriend she beat up after catching him taking nude photos of her without her permission.

Aside from the issue of Rousey dating a man who has a wife, she has caught flak for dating someone accused of domestic violence. Some view that as hypocritical because she has criticized Floyd Mayweather for being a woman beater.

UFC fighter Travis Browne confirmed on Monday that he is in a relationship with MMA superstar Ronda Rousey.

Browne talked about the relationship during an appearance on “The MMA Hour” and said things are serious with them.

Browne and Rousey train together at Glendale Fighting Club in Southern California. The 6-foot-7 Hawaiian fighter has been training in Glendale with Rousey for over a year, and he says they started off as work acquaintances.

“It’s not weird at all,” he said of training together. “Like I said, we didn’t start off interested in each other and now we have to work together. We worked together when we were just acquaintances.”

Browne said that despite what the public sees of Rousey — her appearances in movies, winning awards, exploding in popularity — she is very grounded and a compassionate person.

Rousey has not commented on the relationship, but she drew criticism for being with Browne, who was accused of abusing his estranged wife. Browne’s estranged wife Jenna Webb ripped Rousey in August for being together with Browne. Browne separated from Webb in June.

Ronda Rousey is in the middle of a nasty MMA love triangle involving a married man, and she is being ripped by the man’s wife over the relationship.

Last month, Jenna Renee Webb posted photos on Instagram of wounds she says were from husband Travis Browne beating her. Browne, who is one of the top heavyweights in the UFC, was removed from a UFC event after the allegations surfaced pending investigation.

Browne’s manager denied the domestic violence allegations and said Webb was using the accusations to get back at Browne for cheating on her.

That’s where Rousey comes in. Rousey apparently is the woman with whom Browne was cheating on his wife.

A man posted a photo on Instagram a few days ago of his daughter at a Benihana restaurant. The man pointed out that in the background of his photo were Browne and Rousey dining together. Browne was especially perturbed at being caught on photo.

After seeing the photo, Webb made a few comments about the matter over Twitter. She said she was “disgusted” over the situation and particularly with Rousey. She also says she has known about them being together “for a while.”

@noochsig I'm pretty disgusted…more so in her. But I've known this for a while.

Webb continued to call out Rousey for being with a “wife beater.” There has been no word on the progress of the investigations into the domestic violence allegations Browne is facing. But this is the second time in the past few weeks that Rousey’s relationship with boyfriends has been called into question.

Travis Browne was pulled from a planned appearance on behalf of the UFC after his wife Jenna Renee Webb posted photos on Instagram showing evidence of alleged domestic violence.

Webb posted four shots on Wednesday showing bruises and marks on her face, elbow, neck and knees. She said Browne (17-3-1) had done the damage. 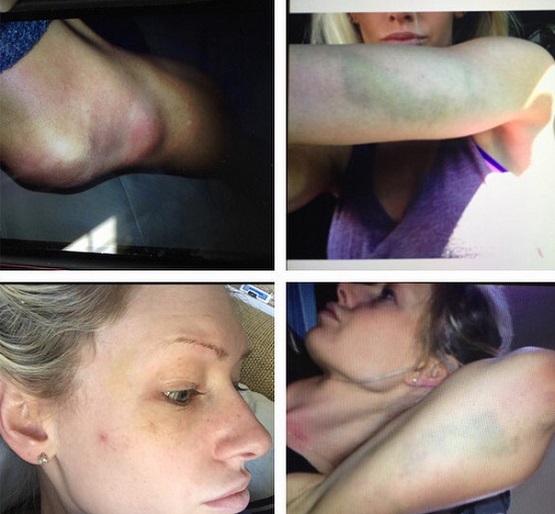 “Probably one of the hardest decisions I’ve ever made was walking away from this life and starting over. I’m still ashamed for staying as long as I did,” Webb wrote as her caption for the injury images.

Browne, who despite being 1-2 in his last three fights is still one of the UFC’s top heavyweights, was pulled by the organization from appearing at UFC Fight Week.

“UFC is aware of the social media allegations made against heavyweight Travis Browne,” the organization said in a statement. “The organization requires all athletes to act in an ethical and responsible manner, as mandated by the UFC Fighter Conduct Policy. UFC will not tolerate domestic violence or any other violation of the policy. Every athlete is deserving of due process and this situation, as with any official allegations, will be duly reviewed and thoroughly investigated by an independent party. In light of this news, Travis will not be participating in this week’s UFC International Fight Week activities in Las Vegas.

“The prevention of domestic violence and the education of the athletes is of the utmost importance to the organization. UFC holds its athletes to the highest standard and will continue to take appropriate action if and when warranted.”

Browne’s manager John Fosco denied the allegations, telling TMZ that Webb is accusing Browne of domestic violence to get back at him for cheating on her. Browne also says the decision to pull out of the even was mutual.

Travis Browne (15-1-1) scored a surprising comeback win over Alistair Overeem (36-13) at UFC Fight Night 26 on Saturday with a sick front kick to the face. Browne was getting destroyed by Overeem early in the fight, taking a number of knees to the body and punches to the head. The fight was dangerously close to being stopped after the first minute, but Brown managed to wiggle out of the way of punishment. Once he got to his feet and away from Overeem, Browne began sending a number of kicks to keep The Reem at a distance. Overeem seemed uncomfortable with the kicks, though he did manage to block most of them. But one kick did get through — a front kick that nailed him straight in the face, knocking him out. It was very similar to the knockout kick from Anderson Silva to beat Vitor Belfort two years ago.

As soon as Overeem hit the mat, Browne jumped on Overeem and got in a few punches before the fight was stopped at 4:08.

After the fight, Browne recognized how close he was to losing.

“He does throw knees like I’ve never felt before,” Browne admitted in a post-fight interview with Joe Rogan. “He hit me with a couple of those body shots. That’s what put me down. I was there mentally, but my body was shutting down.

“This is just another goal in my career that I’ve achieved. Taking out a top-five guy. I’m not done yet. I want to wear that strap. Cain (Velasquez), you’re the best in the world right now. We’re all coming after that belt though.”

While Brown has now won consecutive fights since losing to Big Foot Silva last year, Reem has lost two in a row and is in danger of being cut by the UFC.

Here’s a look at the knockout kick from another angle: