Murry Bartow does not seem to believe the full-time UCLA head coaching job is for him.

UCLA’s season likely came to a close after a loss to Arizona State in the quarterfinals of the Pac-12 Tournament on Thursday. The Bruins finish the season a pathetic 17-16 (as long as they do not accept an invitation to a postseason tournament as expected).

After the game, Bartow said multiple times that he does not want the interim tag removed, according to the Los Angeles Times’ Joey Kaufman.

UCLA interim coach Murray Bartow said “no" at least four times when asked if he’d like the interim tag removed.

"They’ll hire another coach. They’ll hire a very good coach, I’m sure. Hopefully there’s good days ahead for me. I’m sure there are."

The Bruins went 10-10 under Bartow, which is actually worse than the 7-6 record under Steve Alford, who was fired this season.

Bartow declining interest in the full-time job is probably a reflection of him knowing he’s not a candidate for the position. The Bruins are expected to pursue a new coach in what has been an extremely quiet search so far. Luke Walton a candidate for UCLA head coach if fired by Lakers?

Luke Walton may have a fallback nearby in the event that he is shown the door by the Los Angeles Lakers.

In a piece for Forbes that was published on Tuesday, basketball insider Adam Zagoria quoted a UCLA source who listed Walton’s name among the potential candidates for the team’s head coaching job.

A second source was also quoted as saying that UCLA is going through “all the available candidates, some coaches that are coaching, some that aren’t.”

Walton, who is only 38, has brought the Lakers to a 22-19 record this season, despite not having LeBron James for the last seven games and counting due to a groin injury. However, Walton has still gone just 83-122 (.405) in three seasons as Lakers head coach and has yet to make a playoff appearance.

Interestingly enough, Walton has experience in the college ranks (he began his coaching career as an assistant for the University of Memphis in 2011) and in the Pac-12 in particular, having played for four years at Arizona. His father Bill is obviously one of the most beloved players in UCLA history as well and continues to call games for the school on ESPN. What’s more is that Walton, a former Golden State Warriors assistant, worked there with GM Bob Myers, a UCLA alum who is aiding the school in their head coaching search.

The Lakers’ contingent does expect Walton to finish the year as their coach, but it certainly couldn’t hurt for the Bruins to do their due diligence here.

Rumors have been circulating that UCLA may have interest in hiring Rick Pitino, but you might be able to pump the breaks on that talk.

College basketball reporter Adam Zagoria wrote in a piece for Forbes that prominent UCLA boosters Casey Wasserman and John Branca were backing Pitino as their No. 1 choice to replace Steve Alford. That’s significant because Wasserman has tremendous influence at the school.

Wasserman donated money to created The Wasserman Football Center on UCLA’s campus. He was also the primary driver behind the school securing Chip Kelly as football coach. If Wasserman wants something, there’s a good chance he can make it happen.

However, Bruins Nation reported on Saturday that Wasserman is not backing Pitino.

Pitino comes with a host of problems, as he was fired by Louisville amid an investigation into the school potentially paying for a recruit. That came after the school had already been disciplined for their sex parties.

Pitino, 66, is currently coaching a well known Greek team in the EuroLeague.

The report never made much sense, especially since another candidate mentioned for the job is one of his management group’s clients.

UCLA has gone 2-0 since firing Alford.

As one of the school’s most prominent current NBA players, one would expect Lonzo Ball to have some opinions on UCLA’s coaching search, and that is the case.

Ball believes that former UCLA guard and ex-Phoenix Suns coach Earl Watson should be the school’s next permanent coach, citing his ties to the school and NBA experience.

Lonzo Ball on the UCLA coaching search. “I’d like to see Earl Watson get the job.”

Lonzo wasn’t directly asked about Earl, just about the coaching search. Said nice things about Steve Alford, but added that Watson is his preference now that the job is open. Cited that he’s an alumnus and has NBA experience.

Watson spent parts of three seasons as Phoenix coach, going 33-85. While he does have strong ties to the school, it might not be the track record of success that the fans might be seeking.

Watson was actually linked to the UCLA job about a year and a half ago when he was still coaching the Suns. There are no indications that he’s yet a candidate this time around, even though Ball wants him to be. As they officially begin the search for Steve Alford’s replacement as head coach, the UCLA Bruins will be getting help from one prominent NBA figure.

In their press release on Monday announcing Alford’s dismissal after six seasons at the helm, the school wrote that Golden State Warriors general manager and president of basketball operations Bob Myers will be among those assisting athletic director Dan Guerrero in the search for a new coach.

The 43-year-old Myers, who has won three championships and two Executive of the Year Awards in the nearly seven years that he has been in charge of the Warriors, is a UCLA alum. He played for four years on the school’s basketball team from 1993 to 1997, including winning the NCAA title with them in 1995.

The Bruins already seem to be eyeing some big targets for the position, and Myers, a former agent who hired one of the NBA’s top head coaches in Steve Kerr, has just the experience to help his alma mater make the right hire. 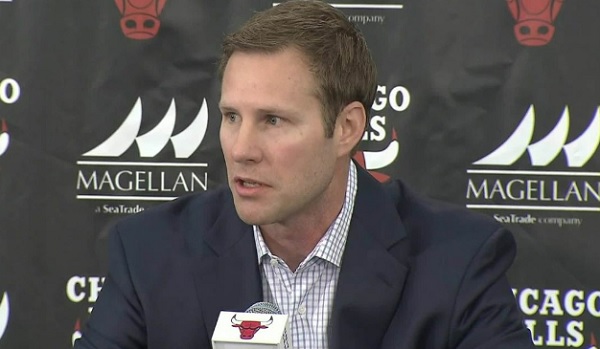 UCLA finally decided to part ways with men’s basketball coach Steve Alford on Sunday following a disappointing run with the program, and the timing may not be a coincidence.

Marc Stein of the New York Times reports that UCLA has been eyeing former Chicago Bulls coach Fred Hoiberg as a potential replacement for Alford.

There have been persistent rumbles in NBA coaching circles that UCLA would pursue former Bulls coach Fred Hoiberg if it parts ways with Steve Alford … which appears increasingly imminent. Whether Hoiberg can be lured back to the college game remains to be seen …

Coaches who are highly sought after at the collegiate level typically are not available in the middle of a season, but it just so happens that Hoiberg was fired by the Bulls earlier this month. While reports have indicated he still wants to coach in the NBA, he would probably have his pick of several top jobs if he chose to return to college.

Hoiberg made a name for himself with the tremendous success he enjoyed at Iowa State, where he had an overall record of 115-56 and led the Cyclones to the NCAA Tournament four years in a row. He’s just 46 and could probably find another opportunity in the NBA, but the state that he left the Bulls in may not help his resume.

UCLA is under enormous pressure to make the right hire with its next basketball coach, and Hoiberg would undoubtedly be a popular choice. Whether he’s interested or not remains to be seen.

The disappointing era of UCLA Bruins basketball under Steve Alford has finally come to an end.

Alford has been fired by UCLA, with an official announcement set to come on Monday, according to both The Athletic’s Seth Davis and Bruin Report Online.

Bruin Report Online’s Tracy Pierson says the school and Alford spent much of the day on Sunday negotiating the coach’s buyout before reaching an agreement.

Alford was in his sixth season on the job and in the middle of an ugly four-game losing streak that was bookended by home losses to Belmont and Liberty. The latter came on Saturday, a day before Alford was fired. The Bruins are 7-6 and have suffered blowout losses to North Carolina, Michigan State, Cincinnati and Ohio State, in addition to the defeats to Belmont and Liberty.

Alford pretty much lived up to exactly what he had shown himself to be during previous stints — a coach who would win a good amount in the regular season and not go far in the tournament. He never advanced past the second round of the tourney while at New Mexico, and he peaked at the Sweet 16 at UCLA. His stint with the Bruins included one losing season and a collective .663 winning percentage — far below the standards and expectations at UCLA.

Back when Alford was hired in March, 2013 by UCLA, I said he was a downgrade from Ben Howland and not in the same class as Dana Altman or Sean Miller. Nearly six years later, all of that was proven to be correct. There is huge pressure on the program to get the next hire right, especially with the football program also being in the tank.

The Bruins fell to Ohio State 80-66 on Saturday in the CBS Sports Classic in Chicago to drop to 7-5. UCLA has lost three in a row — a home defeat to Belmont, a 29-point loss at Cincinnati, and the 14-point loss to Ohio State.

Calls for Alford’s job increased after the loss to Belmont, and they’ve only grown since. When asked about the fans growing frustrated, Alford dismissed the concern.

Steve Alford when asked about fan unrest: “I’m a man of God, so I’ve got an audience of one.”

Perhaps next time he should go with a response along the lines of “we know the expectations from the fans are high, as they should be. We are working to improve and deliver the results everyone is looking for out of us.”

Alford is in his sixth season as UCLA’s head coach and has not advanced beyond the Sweet 16.

Cincinnati’s sports teams have seemingly taken ownership of their UCLA counterpart over the last several months, and Bearcats fans were happy to point that out during their latest triumph.

The Cincinnati men’s basketball team demolished UCLA by a score of 93-64 on Wednesday night. Roughly three months earlier, the Bearcats spoiled Chip Kelly’s UCLA debut with a 26-17 win in Pasadena. When Cincy was up by 30 on Thursday, fans began chanting “just like football!”

Cincinnati beat UCLA in football 26-17 at the Rose Bowl. Bearcats up 25 and the students start chanting "Just like football." pic.twitter.com/Szec1jaU2x

There’s really not much Bruins fans can say about that. You wouldn’t expect a school like Cincinnati to be able to taunt UCLA that way, but that tells you all you need to know about the current state of their respective athletic programs.