Michael Penix Jr. entered the transfer portal two weeks ago after taking a major step back in his fourth season at Indiana, and the quarterback is hoping to revive his college career by reuniting with an old coach.

Washington recently hired Kevin DeBoer as their new head coach. DeBoer was the offensive coordinator and quarterbacks coach at Indiana in 2019 before he left to take the head coaching job at Fresno State.

Penix appeared in six games for Indiana in 2019, and the Hoosiers went 5-1 in those games. There is certainly plenty of familiarity between him and DeBoer, which likely played a role in the transfer decision.

Penix battled a shoulder injury this season and threw for just 939 yards, four touchdowns and seven interceptions in five games. He also suffered a significant injury that cut his 2020 season short. Penix has two years of eligibility remaining. The Washington Huskies have secured their preferred choice as their new head coach.

The school announced Monday that it has hired Fresno State coach Kalen DeBoer as its new head coach, replacing the fired Jimmy Lake.

It had been reported last week that DeBoer had become the firm frontrunner for the Washington job, and it does not seem that anyone else was seriously targeted. That makes sense when you consider DeBoer’s West Coast ties. DeBoer has also shown himself capable of leading a turnaround, winning nine games at Fresno State in only his second season there. The Washington Huskies appear to have identified a leading candidate for their vacant head coach position.

Fresno State head coach Kalen DeBoer has emerged as a “strong candidate” for the Washington job, according to John Brice of Football Scoop. Nothing is official, but with the Huskies not involved in the Pac-12 Championship, it appears the school could move quickly to try to hire DeBoer away from the Bulldogs.

DeBoer is in his second season as Fresno State’s coach, and has overseen a quick turnaround. The 47-year-old has the Bulldogs at 9-3 on the season, a big turnaround after two consecutive middling campaigns. Prior to his current job, he spent one season as offensive coordinator at Indiana in 2019.

The Huskies are looking for stability after firing Jimmy Lake, whose tenure turned particularly tumultuous in 2021. DeBoer ticks a lot of boxes, both in terms of turning around a program and his experience working and recruiting on the west coast. Jimmy Lake was fired by Washington on Sunday, a week after an incident where he got physical with a player on the sidelines.

Lake was seen pushing one of his players on the sidelines during a 26-16 loss to Oregon. Washington later suspended Lake one game over the incident. The suspension took place on Saturday, and Lake was fired on Sunday. He never coached Washington again after the Oregon loss.

Lake did a few things that game to embarrass the program, beyond pushing his player. He inexplicably punted late in the game. He was also trolled over a recruiting comment he made earlier in the week.

Lake’s firing was likely 90 percent due to performance. The other 10 percent likely stemmed from the incident and the recruiting comments, which brought embarrassment to the school.

Lake was hired as head coach in Dec. 2019 after Chris Petersen stepped down. The Huskies went 3-1 in the COVID-shortened season last year under Lake. They were 4-6 this season (4-5 in games he coached). Lake was a defensive coordinator under Petersen, and the Huskies’ defense under him was good. But the offense was pathetic and a huge problem this season.

Still, the firing overall reflects poorly on Washington. They hired Lake and never gave him a shot. He got four games in an awkward, shortened season last year, and only nine games this season. They fired him before he ever completed a full season. They knew he was a defensive coach but didn’t even give him one offseason to try and improve the offense with new assistants and players. And if him being physical with a player was the issue, then the school looks even worse. Why? Because Lake was accused of being physical with a player in 2019. Lake was a defensive coordinator at the time. That means Washington promoted Lake to head coach despite that 2019 incident.

Washington either didn’t do its due diligence before promoting Lake, or they didn’t find his physical approach with players to be an issue until it happened on national TV.

Either way, the whole thing makes Washington look really bad for not even giving him one full season. Washington felt they had to send some message after the Huskies’ 26-16 loss at home to Oregon on Saturday, and they have done that.

Washington on Sunday fired offensive coordinator John Donovan, who was in his second season on the job. Wide receivers coach Junior Adams will take over as the play caller, while quality control analyst Payton McCollum is now the team’s quarterbacks coach.

Donovan’s firing comes a day after the Huskies’ offense was unproductive against the Ducks. They had just 166 yards and seven first downs in the game, continuing a bad trend that has existed all season.

Washington is averaging 22 points per game this season, which is 109th of 130 schools. They have just 11 passing touchdowns in nine games. The 4-5 Huskies have failed to score more than 17 points in a game four times this season.

Their head coach Jimmy Lake is a defensive specialist, and their defense is ranked 23rd of 130 schools in points allowed per game. Lake is still being investigated over making physical contact with one of his players on the sidelines.

Prior this job at Washington, Donovan spent four seasons on the offensive staff for the Jacksonville Jaguars.

Ryan Leaf does the unthinkable while helping rival team 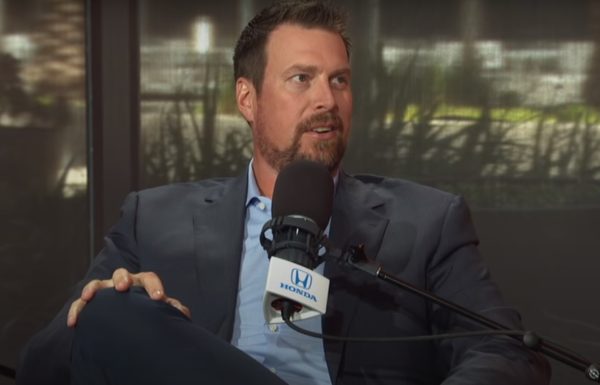 Before he became one of the most notorious busts in NFL Draft history, Ryan Leaf was a star at Washington State. Leaf passed for 3,968 yards and 34 touchdowns as a junior in 1997. He led his Cougars to a 10-1 regular season, including a win over Washington in the Apple Cup, before the team lost to No. 1 Michigan in the Rose Bowl to fall to 10-2.

Leaf then left for the NFL and became the No. 2 overall draft pick by the Chargers in 1998. He lasted just three years in the pros before flaming out. He later had substance abuse issues and multiple legal issues, including several arrests and time spent in prison. Now he’s trying to be a public speaker, encouraging sobriety by telling others to avoid the kinds of issues he has had.

Thank you for sharing your story with our team! @RyanDLeaf gave us an uplifting message and inspiring story! You are always welcome in Husky Territory! #BowDown pic.twitter.com/UgmlOi3KC4

Leaf said he was appreciative of the opportunity to speak to the team, even if it meant having to wear a shirt for his rivals.

Thanks Coach for the opportunity to be of service. When we care about and are responsible for each other’s well being it doesn’t even matter if you have to power thru wearing purple for an hour!! See ya at the Apple Cup. #GoCougs https://t.co/8y7VUElQkB

Leaf will always be a Cougar, but sometimes circumstances call for one to wear the colors of a rival.

Washington earned the right to face USC in the Pac-12 Championship Game this week with a record of 3-1, but the Huskies have been forced to give up their spot because of issues related to COVID-19.

The Pac-12 announced on Monday that Oregon will replace Washington in the championship game. The decision was made due to Washington not having enough scholarship players available for the 53-man roster or every position group. A number of players have been ruled ineligible due to positive COVID-19 cases and contact tracing.

With the Pac-12 playing such an abbreviated schedule this season, it was highly unlikely that any team would have received consideration for the College Football Playoff. Even if 5-0 USC defeats Oregon on Friday night, the Trojans won’t be a legitimate CFP contender.

It’s not as big a point of discussion as what happened with the Big Ten, but the Pac-12 is sorting through plenty of issues when it comes to its championship game.

The USC Trojans are poised to represent the Pac-12 South in the conference championship provided they beat UCLA on Saturday. The Pac-12 North, however, is in serious question. The Washington Huskies, who lead the division at 3-1, were slated to play Oregon in what essentially would have decided the division winner. The Huskies were hit by a COVID-19 outbreak, however, and the game was canceled and declared a no contest. That means Washington wins the division.

However, there are legitimate questions as to whether the Huskies can recover in time to play the Pac-12 title game. According to Dave Mahler of 950 KJR in Seattle, Oregon would potentially be asked to take their place if Washington can’t play.

What I’m hearing the Pac 12 plan is for now: Winner of south goes to Champ game. UW will get shot to play. If not cleared medically, Oregon will go. Idea of Colorado/USC in Champ game if both win tomorrow is off the table barring unforeseen circumstances

This will come as a frustration to the second place team in the Pac-12 South in particular. That may end up being an unbeaten Colorado, who played one fewer Pac-12 game than USC and didn’t get the chance to play the Trojans. They would argue they deserve the right to play for a conference title more than anyone from the North, but that’s not how it works.

As important as this is, it’s ultimately lower stakes than other conferences. The Pac-12 just doesn’t look playoff-bound no matter what.

The Washington Huskies are suddenly free next Saturday with the cancellation of the Apple Cup, but there may be an opponent they can line up quickly.

According to Bruce Feldman of FOX Sports, the Huskies are already trying to schedule a game against BYU on Saturday. As Feldman noted in a previous tweet, the Cougars do not have another scheduled game until Dec. 12.

For now, according to KJR’s Dave Mahler, BYU is determining whether they need the game or not and will wait to see Tuesday’s initial College Football Playoff rankings before making a decision.

Washington State is currently experiencing a COVID-19 outbreak within the team, meaning they won’t be able to play.

Washington is off to a 2-0 start. They will want to get as many games in as possible, and they won’t want to lose their momentum, either. The opportunity to play anyone would do them a world of good considering how exciting they’ve looked so far this year.

Emergency scheduling has become something that Pac-12 squads simply have to deal with. Last weekend’s efforts came up empty, but Washington has some extra time to make something work.