Though we are just two months into the 2019 campaign, Carlos Correa may already have the award for strangest injury of the season on lock.

In a statement released on Wednesday, the Houston Astros shortstop, who landed on the injured list this week with a fractured rib, revealed that he suffered the fracture during a massage at his home.

“I’m extremely disappointed about not being on the field with my teammates,” said Correa in the statement, per Brian McTaggart of MLB.com. “I sustained the rib fracture during a massage at my home on Tuesday.

“To sustain an injury in such an unusual way makes it even more frustrating,” he added. “However, I will work hard to get back on the field as quickly as possible to help our team achieve our goal of winning another championship.”

The former All-Star Correa, who is hitting .295 with 11 homers and 35 RBIs in 50 games this season, is expected to miss an extended period with the injury.

As for the manner in which he sustained the fracture, perhaps it will have other MLB massage enthusiasts thinking twice before indulging in them.

Chalk up another one for the weird baseball injuries.

The Tampa Bay Rays announced on Tuesday that they had placed pitcher Blake Snell on the 10-day injured list, retroactive to Sunday. The reigning Cy Young winner is expected to miss a start. But that’s only part of the story.

The real story is how Snell got hurt.

Tampa Bay Times Rays reporter Marc Topkin says Snell decided to move a decorative stand in his bathroom on Sunday that he didn’t realize was in two parts. The bottom piece fell on his right foot. He has a fractured fourth toe on his right foot.

#Rays Snell said he was getting out of the shower Sunday night, decided then to move a decorative stand in the bathroom that he didn’t realize was in 2 parts, and as he lifted it the bottom piece, made of granite, fell on his right foot. That fourth toe is a bruised red mess. https://t.co/KHUOk5FcBL

Missing Snell for a start is a tough break (literally) for the Rays, but they’ll hope that’s all he misses.

The 26-year-old southpaw has picked up where he left off following last year’s season where he went 21-5 with a 1.89 ERA. He’s 2-1 with a 2.16 ERA this season and has a league-best 36 strikeouts. He’s only allowed one run over this last three starts.

Toronto Blue Jays outfielder Dalton Pompey has a long history with concussions, and he must be in disbelief over the way he suffered his latest.

On Thursday, Pompey was a late scratch from Toronto’s lineup for their spring training game against the Philadelphia Phillies after he bumped his head on some bats that were on top of his locker. He was later diagnosed with a concussion and has been placed in MLB’s concussion protocol.

Dalton Pompey was diagnosed with a concussion after hitting his head on some bats above his locker Thursday. Now he’s been placed under MLB concussion protocol. #BlueJays

As Mark Armstrong of Jays Journal reminds us, this is at least Pompey’s third concussion since he began playing professional baseball. He sustained one sliding into second while playing for team Canada at the World Baseball Classic in 2017, and he also suffered a concussion during a Triple-A game in 2016.

Pompey is batting .282 this spring and had a decent chance to earn a roster spot with the Blue Jays, who are dealing with some injuries and in need of outfield depth. He has no minor league options left, so his future with the team is less certain in the wake of his latest concussion.

Baseball players tend to suffer some of the most bizarre injuries you’ll ever hear of, but Pompey’s is incredibly unfortunate given his history. The timing also could not have been much worse. 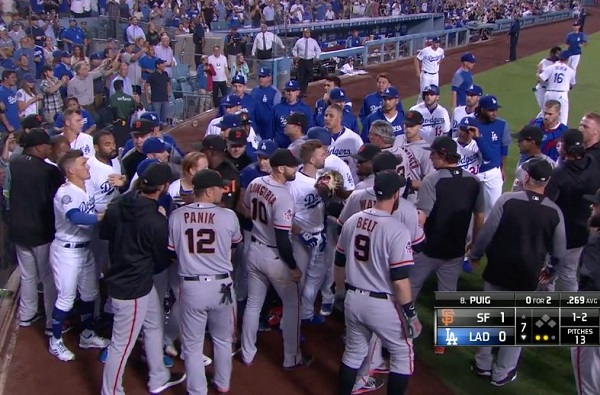