Zion Williamson may finally be taking the advice of critics to heart.

This week on “The Hoop Collective,” ESPN’s Brian Windhorst reported that the New Orleans Pelicans star has lost significant weight since the bubble.

“I was told that Zion, and I don’t think they really wanted to publicize where he was physically when he came back to the bubble, but I have heard that it’s in excess of 25 pounds he’s lost from where he was in the bubble to where he is now,” said Windhorst, per RealGM. “He is not as svelte by any stretch of the imagination, but he definitely is moving better.”

Williamson, 20, played his rookie season at a listed weight of 284 pounds. For a player who is 6-foot-6 and heavily reliant on athleticism, that was definitely a cause for concern. Those concerns came to fruition when Williamson missed the start of the season due to meniscus surgery, ultimately appearing in just 24 games all year.

The former No. 1 overall pick was also still on a minutes limit in the bubble but finished the season with averages of 22.5 points and 6.3 rebounds per game. Many, including Williamson’s own sponsors, would like to see him lose weight. Now that he seems to be doing so, it could be the first step in unlocking Williamson’s true potential.

The New Orleans Pelicans were eliminated from playoff contention on Sunday after a 122-113 loss to the San Antonio Spurs, and some of their players are blaming themselves.

The Pelicans fell behind 17 points in the first half before starting to come back. Zion Williamson said the team’s effort to start the game was “not acceptable.” He also said the lack of effort translated to problems in the second half.

Similarly, guard J.J. Redick said the team began the game “flat” and that they did not have a competitive spirit to open things up.

New Orleans has gone 2-4 so far during the restart in Orlando and has two games remaining — against the Kings and Magic. The NBA reportedly expanded the field of competition in the restart to include the Pelicans for Williamson, but New Orleans wasn’t able to make the most of the chance.

One of the real shames is Redick’s streak of making the playoffs in every NBA season of his career will come to an end.

Zion Williamson’s bubble experience has been more like a bubble-wrapping experience thus far, and he is having difficulty with the imposed limits.

The New Orleans Pelicans star opened up to reporters on Sunday about the minutes restriction that the team has had him on for their seeding games.

“It’s very tough, to be honest, because as soon as I start to break that sweat, I look over, that horn is for me and I have to come out the game,” Williamson said, per Andrew Lopez of ESPN. “Also, when I do catch the flow of the game, like I said, that horn goes off and it’s for me.

“It’s still fun but I guess, like you said, it’s not to that full extent as y’all are used to seeing,” he went on. “I’m a competitor, I want to stay on the court. When I’m coming out of the game, my competitive side of me that I want to stay in. I guess that does affect the fun a little bit, but not too much.”

The No. 1 overall pick has been limited to playing in bursts thus far in Orlando and is mostly off the floor to close out quarters. Williamson was held to 15 minutes in Thursday’s loss to the Utah Jazz and 14 minutes in Sunday’s loss to the LA Clippers (though that game was a blowout).

The Pelicans are fighting for their playoff lives right now, so every game is very important. That may also be part of why Williamson is struggling with the playing restrictions, but the team may not be lifting them any time soon.

Zion Williamson’s minutes will continue to be limited by Pelicans

Those upset about the New Orleans Pelicans’ handling of Zion Williamson in Thursday’s game have some bad news coming their way.

Pelicans executive vice president David Griffin said Friday that Williamson will not play “significant minutes” in the team’s next game, and perhaps even beyond that, citing the need to ramp up his activity after his return to the NBA bubble.

“I appreciate the fact that everyone wants him to play 40 minutes every night,” Griffin said, via Christian Clark of NOLA.com. “I can promise you he’s not going to. No mistakes were made yesterday with how this was handled other than by me coming forward and expressing this in the clearest way possible. This isn’t complicated. He will not play significant minutes in the next game, and he may not in the following game. This is all about the ramp-up time. He didn’t get the benefit of the things that his teammates got for those 13 days. This is going to take some time.”

Williamson was out of the NBA bubble for over a week tending to a family matter. That meant he missed numerous 5-on-5 practices, as well as all three of the team’s scrimmages. The Pelicans believe that he needs to be pushed back to full speed slowly as a result.

Williamson reportedly hates the restrictions, but has no choice. The Pelicans will be very cautious, despite the fact that they are four games out of the eighth Western Conference playoff spot and need wins.

Zion Williamson was reportedly ‘pissed’ about his minutes limit The New Orleans Pelicans’ handling of Zion Williamson in the NBA restart opener puzzled many, including apparently the player himself.

Williamson played in only 15 minutes of the New Orleans Pelicans’ 106-104 loss to the Utah Jazz on Thursday. He was also benched during crunch time, with Williamson sitting out the last 7:19 of the contest despite his team losing by just two points.

Appearing on Friday’s edition of “The Dan Patrick Show,” Chris Haynes of Yahoo Sports reported that Williamson was “pissed” about his usage in Thursday’s game.

“Zion was pissed. He wanted to play,” Haynes said. “And obviously, I think that members of the Pelicans feel like if he was able to go down the stretch or play significant minutes that they would have got the win last night. But the plan was to get him out there in three- to four-minute bursts. They say that he wasn’t really on a minutes restriction, but they just wanted to make sure they kept him in spurts, but I don’t think Zion knew that he was going to go out there and get 15 minutes.”

The Pelicans wanted to be cautious with Williamson after he spent a week outside of the NBA bubble tending to a family matter.

To be fair, this is pretty much what we heard the team was going to do. What came as a surprise was Williamson’s absence down the stretch in an important game for New Orleans. Even with the usage plan, many felt Williamson had one more “burst” in him that could have put the team over the top. Perhaps Williamson himself would agree with that.

The New Orleans Pelicans lost to the Utah Jazz 106-104 in the first game of the NBA’s resumed season on Thursday, and it didn’t help that arguably their best player spent crunch time on the bench.

Zion Williamson was on a minutes restriction, which meant he didn’t play at the end of the game when New Orleans needed him the most.

“We wish we could have played Zion down the stretch,” Pelicans coach Alvin Gentry said after the game. “But he had used the minutes that had been given to us. That’s just the way it is. We weren’t going to stick him back out there. Our medical team said we played for us to play him.”

Williamson played in just 15 minutes, scoring 13 points in the game. His team was leading 93-89 with 7:19 left when he was replaced, and he never returned. They lost by two.

Williamson was on restricted minutes in order to work his way back into shape after spending around a week outside of the NBA’s bubble in Orlando on leave. Some wonder if it really is going to hurt his whole career to play 17 or 18 minutes instead of 15, but the Pelicans decided on a minutes limit and stuck to it.

Williamson believes he needs a few games to get back to normal.

Zion says he thinks it could take a couple games for him to get back to normal.

It may have cost them the game, but they have been extraordinarily cautious with him all along.

Zion Williamson will be playing in the New Orleans Pelicans’ first game of the NBA Bubble restart on Thursday.

Williamson was away from the NBA’s bubble environment in Orlando on an excused absence and returned last week. He cleared quarantine on Tuesday and was able to practice with his team. There were questions about whether he would be back up to playing shape in time for Thursday’s game against the Utah Jazz, and he will.

This is not unlike the situation when Williamson made his season debut in January. He was returning from a knee injury and got eased back, playing just 18 minutes in his first game back.

Williamson has averaged 23.6 points and 6.8 rebounds on 58.9 percent shooting this season.

Zion Williamson is back in practice with the New Orleans Pelicans with a chance to play in the team’s season opener Thursday.

Adrian Wojnarowski of ESPN reported that Williamson has cleared his quarantine period and will be permitted to practice with the team. That will give him two chances to get back up to speed in practice before Thursday’s game against the Utah Jazz.

Pelicans F Zion Williamson has cleared quarantine and will return to practice with the team in Orlando this evening, sources tell ESPN.

There is no guarantee that Williamson will play, as the Pelicans will want to be sure that he’s completely ready to go. Fundamentally, though, he is healthy and wasn’t out of the bubble for that long, so he should be okay to play.

Williamson briefly left the bubble to deal with an undisclosed family matter. He had to complete a four-day quarantine upon returning.

Zion Williamson could play on opening night after return to bubble

Zion Williamson has a chance to play on opening night after the NBA announced his quarantine period upon returning to the Orlando bubble.

As Williamson tested negative for COVID-19 daily while out of the bubble, the league is requiring a four-day quarantine for the New Orleans Pelicans star. That leaves open the possibility that he could play on Thursday when the team resumes its season.

It leaves open the possibility that Williamson could play Thursday against Utah on Opening Night 2.0

Williamson originally departed the bubble to deal with a family matter, but returned Friday. As long as he doesn’t register a positive test in the next few days, there’s no reason he wouldn’t be able to play next Thursday.

The standout rookie is averaging 23.6 points and 6.8 rebounds per game in 19 games so far this season. 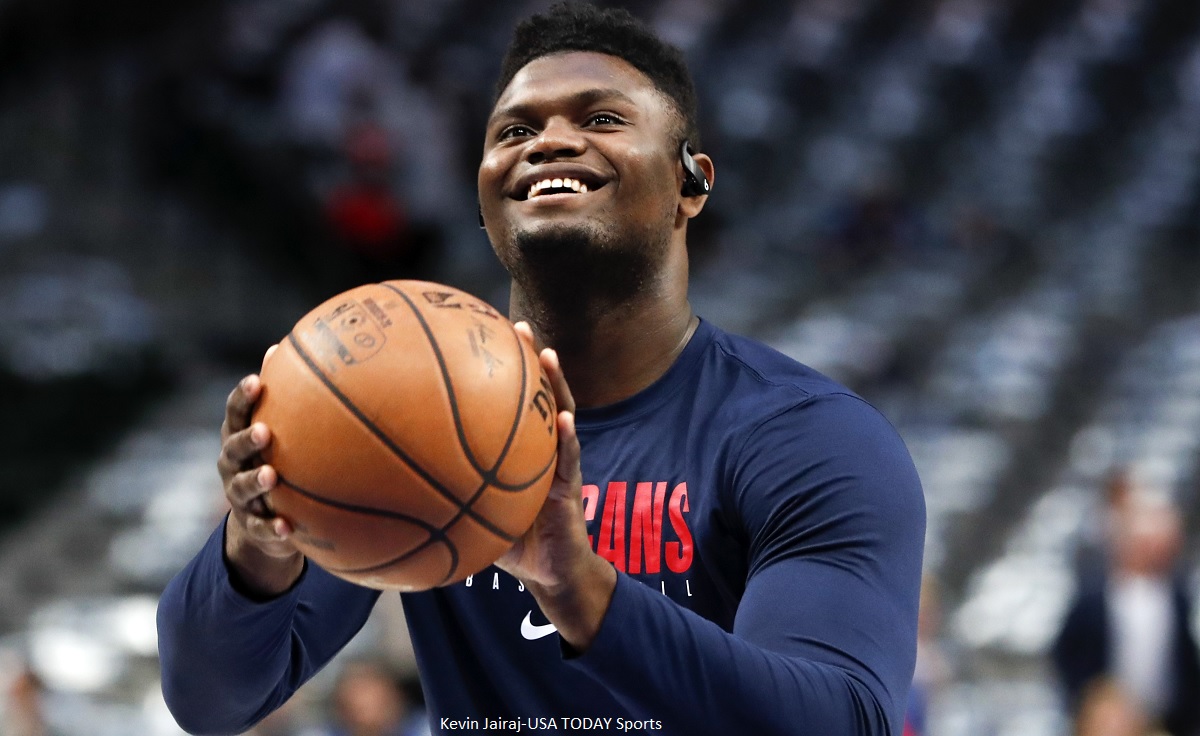 Zion Williamson is officially back in the bubble.

Shams Charania of The Athletic reported on Friday that the New Orleans Pelicans star has returned to the NBA campus in Orlando.

The 20-year-old Williamson had left the bubble over a week ago to attend to an urgent, undisclosed family matter. A recent update given by the Pelicans revealed that Williamson was getting tested daily for COVID-19 while away, which had continued to produce negative results.

The exact length of Williamson’s quarantine period is still to be determined but will be for a minimum of four days, per league protocol. The Pelicans are set to begin the restarted season in six days on July 30 against the Utah Jazz, so Williamson’s status for that game seems very much up in the air.