Look: Here is the Astros’ alleged cheating setup with trash can, monitor 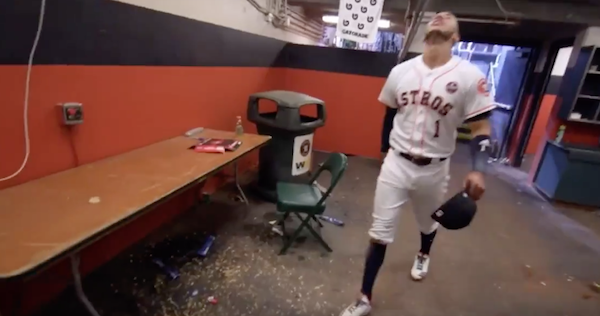 The Houston Astros have essentially been caught redhanded stealing signs during their World Series season in 2017, and a documentary from their championship year appears to have given us a first-hand look at the setup they allegedly used to steal and communicate signs.

A bombshell report from The Athletic last week detailed how the Astros had a camera in the outfield focused on the opposing team’s catcher at Minute Maid Park. The footage was fed to a monitor in a hallway between the home dugout and clubhouse. A player or staffer would watch the monitor to see which pitch the opposing catcher was calling for and then loudly bang a trash can to let the hitter know if an off-speed pitch was coming. The setup sounds quite sophisticated, but it looks a lot simpler when you see it.

This is believed to be the sign-stealing setup, which was briefly shown in a 2017 World Series documentary on the Astros.

Here is the set-up in question from the World Series Documentary. Cable, chair, laptop, trash can. pic.twitter.com/84uGGsu15N

What you can see in that video is a table, chair, large trash can, some sort of cable, and a bunch of sunflower seeds scattered on the floor. The seeds could indicate someone was sitting at the table for a lengthy period of time. But where is the TV monitor? It looks like it was moved after the game, which would make sense.

If you picture that setup when watching some of the compelling videos that have surfaced over the past week, it’s fair to assume that is a glimpse into how the Astros were cheating. There has even been reason to believe the Astros changed the position of their TV cameras in 2017 to get a better view of the catcher’s signs.

The more that comes out, the weaker Houston’s defense is going to be. It is only a matter of time before Major League Baseball takes disciplinary action against the organization.