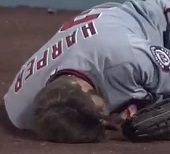 Dodgers catcher A.J. Ellis led off the bottom of the inning with a drive to right, and the Nationals phenom went face-first into the right field scoreboard trying to make the play. He was bleeding from his face/chin after the collision. Harper left the game immediately.

Ellis ended up with a triple on the play and scored on a groundout on the next at-bat.

Harper might be out for a while. He missed Friday and Saturday’s games for the Nats after having a minor procedure to remove an ingrown toenail. In his second game back, this happened.

Video via The Outside Corner