Bryce Harper’s ‘clown question, bro’ being trademarked by Under Armour 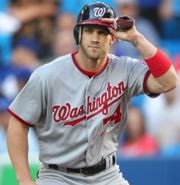 Unless Bryce Harper is one of the most savvy 19-year-old businessman in America, I highly doubt he intended to profit from ripping into a reporter who asked him one of the dumbest questions of the year. Had he come up with something less hilarious than “That’s a clown question, bro,” there probably would not be any money involved. According to CSNWashington.com, Harper revealed on Thursday that Under Armour will soon be selling t-shirts and merchandise with the now-famous phrase printed on them.

Either Harper or someone in his camp was thinking on their toes as soon as people started buzzing about the comment, because the trademark was claimed the day after the exchange. As we know, politicians have even taken a liking to using “clown question, bro” so it’s safe to assume there are people out there who will buy the apparel.

Like Robert Griffin III, this is yet another example of how there are still some young athletes out there with the right people on their team making sound business decisions. Some people have been critical of RG3 for trademarking his various names and his catch phrase, but why let others profit off of it? Harper’s the one who made the comment. If breweries and other companies are planning to make money off of it, he might as well do the same.