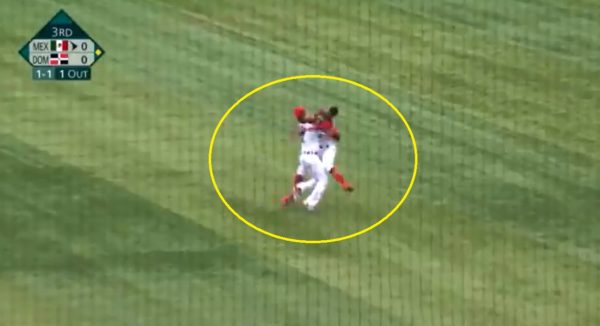 Two Dominican Republic players were involved in a nasty collision during the team’s game against Mexico at the 2020 Summer Olympics in Tokyo on Friday.

Mexico was batting in the top of the third inning with a runner on first, one out, and the game scoreless. Isaac Rodriguez popped up the pitch to shallow right, leading Julio Rodriguez and Gustavo Nunez to converge.

Rodriguez made the catch in right, but that was brutal.

Brutal collision between Julio Rodriguez and Gustavo Nunez. Both players stayed in the game. pic.twitter.com/9S3NtfSgrC

Nunez was later removed from the game.

Nunez, 33, has played in the minor leagues but never made it to the majors. Rodriguez, 20, is a promising prospect in the Mariners’ system.