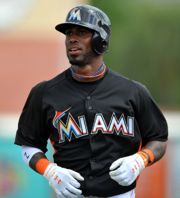 Less than a year after making a huge splash in free agency, the Miami Marlins reportedly are dismantling their team and sending some of their best — and most expensive — players to the Toronto Blue Jays.

FOXSports.com reporters Jon Paul Morosi and Ken Rosenthal say that pitchers Josh Johnson and Mark Buehrle are being traded from the Marlins to the Blue Jays as part of a blockbuster deal. They say shortstop Jose Reyes, who signed a six-year, $106 million deal last offseason, is also part of the trade. Catcher John Buck and utility man Emilio Bonifacio reportedly are also being sent to Toronto. The five players mentioned in the trade are owed nearly $165 million.

The Marlins reportedly are getting back shortstop Yunel Escobar, pitcher Henderson Alvarez, and catcher Jeff Mathis, who all have major league experience. They’re also reportedly receiving infielder Adeiny Hechevarria, left-handed pitcher Justin Nicolino, and outfielder Jacob Marisnik, who are all prospects. Alvarez went 9-14 with a 4.85 ERA last season for Toronto. Escobar is coming off the worst season of his career — he had a .644 OPS and career-low 1.8 WAR.

The Marlins began the process of dismantling their new-look team — which included a new stadium, new uniforms, and new team name — after the season ended. They fired manager Ozzie Guillen, and traded high-priced relief pitcher Heath Bell to the Diamondbacks. It looks like they’re in full-on rebuilding mode after going a disappointing 69-93 last season, which has left stud outfielder Giancarlo Stanton “pissed” in his words. The Blue Jays are hoping the additions will help them compete in the challenging AL East.

The Marlins already did not include no-trade clauses in contracts for players, which made them less attractive as a destination for free agents. After seeing the team give up on high-priced players after one year, who would be willing to sign with them in the future?