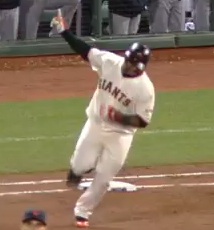 The San Francisco Giants trounced the Detroit Tigers 8-3 in Game 1 of the World Series on Wednesday night in San Francisco, and they were led by Pablo Sandoval who had a historic night.

The pudgy third baseman affectionately nicknamed “Kung Fu Panda” went 4-for-4 with three home runs, a single, three runs scored, and four RBIs in what was nearly a perfect night at the plate. Sandoval was pulled for a defensive replacement late in the game, but not before amassing 13 total bases — one less than Albert Pujols’ record 14 achieved in last year’s World Series.

Sandoval, a two-time All-Star, joined Albert Pujols, Reggie Jackson, and Babe Ruth (twice) as the only players in MLB history to homer three times in a World Series game. His three-homer game was also the second in AT&T Park history. Former Los Angeles Dodgers shortstop Kevin Elster was the first player to hit three home runs in a game at the park. Elster accomplished the feat on April 11, 2000, in the first game ever at the park, back when it was named Pac Bell Park.

Sandoval was already considered one of the better hitters in the National League, but Wednesday’s magical performance may have put him in a new category. He is now in a class with three other players, two of who are already in the Hall of Fame, and a third who will be joining them before long. Babe Ruth, Reggie Jackson, Albert Pujols, and Pablo Sandoval. That is some impressive company.