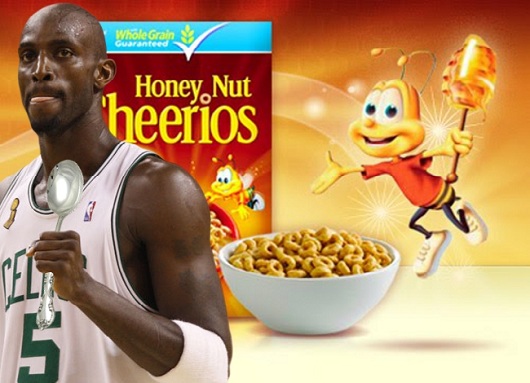 The Boston Celtics reportedly instructed security guards not to allow Honey Nut Cheerios boxes or signs into the TD Bank Garden for the team’s game against the New York Knicks on Thursday.

The last time the teams played, Knicks forward Carmelo Anthony and Celtics forward Kevin Garnett got into a fight that resulted in double-technical fouls. Melo was so upset with KG he confronted him twice after the game.

It was reported that Garnett got in Melo’s head by telling him that his wife, La La, tasted like Honey Nut Cheerios. The odd yet humorous line was apparently an inference that Garnett had been with La La while she and Melo were separated.

Even though Celtics coach Doc Rivers denied anything was said about Honey Nut Cheerios, the potentially false story first reported by Black Sports Online has been accepted as fact. In light of the story’s widespread acceptance, the Celtics were expecting fans to break out the Honey Nut Cheerios taunts on Thursday.

ESPN New York’s Ian Begley reported Thursday that security guards told him they were instructed to confiscate any signs with Honey Nut Cheerios references. Gethin Coolbaugh says he was told the same about Honey Nut Cheerios boxes. In case you’re wondering whether the Celtics had any reason to worry, the New York Daily News has photos of signs that were confiscated.

That was probably a good decision by the Celtics. Remember what happened the last time at a Celtics game when fans used an urban legend to taunt an opposing player? It wasn’t pretty.

Image via With Leather