Kobe Bryant: Kwame Brown Didn’t Want the Ball Because He Was Too Nervous 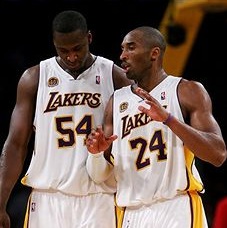 Kobe Bryant spoke with a psychology class at UCSB this week. While he was there, he answered many questions from the audience. The story that is getting the most attention is one Kobe shared about his former teammate, Kwame Brown.

Kobe was talking about the lost days for the Lakers, before they acquired Pau Gasol in a trade that sent opposing coaches into apoplectic fits. These were the days when Kobe was surrounded by Smush Parker, Mo Evans, Luke Walton, and Lamar Odom. The story he told is too funny, yet so sad.

“I got to say, it was tough doing it that year. I was playing with guys, God bless them — God bless them — but Kwame Brown. Smush Parker. We had one game right before…by the way, what I say here, I say directly to them, see what I’m saying, I don’t talk behind people’s back. Things that I say to you, I’m comfortable saying this to them and I’ve said this to them…But like, the game before we traded for Pau, were playing Detroit and I had like 40 points towards the end of the game. This is back when Detroit had Rasheed [Wallace], Chauncey [Billups] and those guys, so we had no business being in the game. So down the stretch of the game, they put in a box and one. So I’m surrounded by these players, Detroit players, and Kwame is under the basket, all by himself. Literally, like all by himself. So I pass him the ball, he bobbled it and it goes out of bounds.

“I go to Phil [Jackson], I say, ‘Hey Phil, take him out of the game.’ He’s like, ‘Nah, let him figure it out.’ So, we lose the game, I go the locker room, I’m steaming. Steaming. I’m furious. Then, finally I get a call, they said, ‘You know what, we got something that’s happening with Pau.’ I was like, ‘Alright. Cool.’…That’s what I had to deal with the whole year.”

Naturally, your instinct will be to rip on Kwame Brown after this. Honestly, knowing the way Kwame was as a player, is this even a surprise? Not really.

The story further reaffirms a point I’ve been making for a long time. Even superstars like Kobe Bryant need other good players on their team in order to succeed. No player can do it by himself, and certainly you can’t win with nervous teammates who don’t want the ball.

Here’s a video of Kobe sharing the story too: