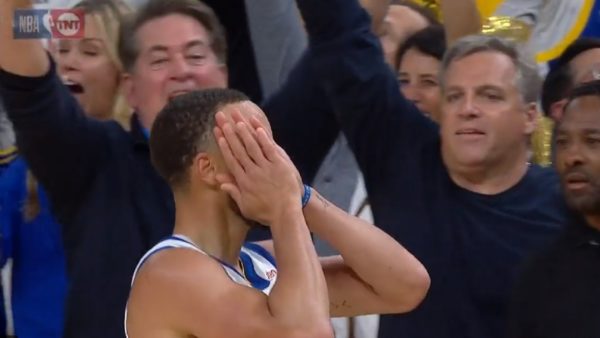 Shortly after the ball rolled off his fingertips, Golden State Warriors superstar Steph Curry put his hands together and rested his head.

“Night, night,” Curry could be seen saying as the ball dropped in the bucket.

In that moment, Curry knew it was over for Dallas. It was time to put the kids to bed while the Warriors began celebrating a 126-117 comeback victory in Game 2. Curry 32 points, including six three-pointers, helped put Golden State up 2-0 in the series and one step closer to the NBA Finals.

“You can tell how un-choreographed that stuff is,” Curry said after the game, via Sports Illustrated. “I was having fun and you talk about having kids and how bedtime routines are important. It’s the final signal for a job well-done that day.

“I was looking at the ball so I was talking to myself. I don’t know who heard it but it’s a good way to finish a game and we have to take that to Game 3.”

The 19-point comeback and Curry’s sleeping beauty bucket in the final moments should help propel the Warriors forward. And they’ll need that momentum as they travel to Dallas for Game 3 on Sunday night.