Nine things the college football polls got wrong after Week 2 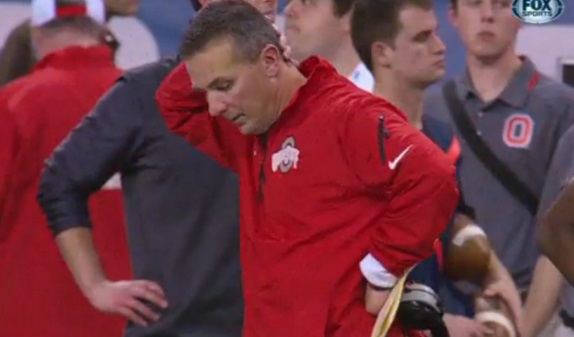 Two full weeks of the college football season are in the books, and the rankings for Week 3 have been posted. Some teams have been rewarded for victories over the weekend, while others were punished by voters for their losses. Many changes happened — some good, and others bad. Here’s a look at nine things the college football polls got wrong after Week 2.

1. USC should not have been jumped over Penn State

USC moved up two spots in the AP poll and one in the Coaches Poll to No. 4 in the country, ahead of Penn State.

Perhaps we’re dwelling a bit too much on that unconvincing result against Western Michigan, especially with how impressive Sam Darnold looked against a Stanford team that was expected to give the Trojans a stern test. But Saquon Barkley-led Penn State made quick work of Pitt and looked brutally efficient doing it. It seems like the Nittany Lions were dropped for playing a weaker opponent than USC.

2. Ohio State was punished too severely

There’s a strong argument to be made that Ohio State was dropped too far. Let’s make one thing clear — the Buckeyes’ performance on Saturday, in a home game, was unacceptably bad as they were wiped out 31-16 by the Sooners. As a result, they dropped six spots in this week’s AP poll, going from No. 2 to No. 8, and seven spots down to No. 9 in the Coaches Poll. If you look closely at the numbers, they’re just one point ahead of No. 9 Oklahoma State, and behind the Cowboys in the Coaches Poll.

The Buckeyes absolutely deserved to take a serious hit for their performance, but dropping them closer to sixth or seventh would have made more sense. With the understanding that these rankings are primarily based on performance and not talent, Ohio State is still an extremely deep and gifted team. I’d still take them over Washington head-to-head, even though the Huskies are now ranked ahead of them. Luckily, the Buckeyes have a long time to make things right.

3. Auburn given too much benefit of the doubt

It’s safe to say that the Auburn-Clemson matchup did not live up to the hype. The reigning champions won 14-6, and Gus Malzahn’s Auburn offense looked completely toothless for most of the game. And while Clemson’s defense was good, not all of Auburn’s struggles can be chalked up to simply being overwhelmed.

Despite looking quite unimpressive, Auburn dropped just two spots in the AP poll from 13 to 15. The coaches dumped them a bit further to No. 17. Voters were likely impressed with how Auburn’s defense handled Clemson, but for a team that is supposed to challenge for a spot in the SEC title game, Auburn really didn’t bring much to the table in Death Valley. Few would have batted an eye if they had dropped a bit further.

4. Stanford took too much of a hit

Why was Stanford punished with a five-spot drop for losing to USC while Auburn only dropped two spots over the Clemson game? The Cardinal had no answer for Sam Darnold and were victimized appropriately, but there’s something not entirely right about this squad winding up beneath the likes of Kansas State and Virginia Tech when their loss came to arguably the best quarterback in the nation.

Realistically, Stanford and Auburn both lost to very good teams and were going to take a hit in the polls either way. But there’s not a lot of reasonable consistency in one team dropping by two spots and another by five. They should have been given similar drops, and in this case, Stanford’s was just too harsh.

5. Louisville is ranked too highly

Lamar Jackson probably has some people overrating the Cardinals a bit. They’re 2-0, but they jumped from 17 to 14 in the AP Top 25 only on the strength of a 47-35 win over a mediocre North Carolina team. This mediocre North Carolina team had a 28-27 lead on Louisville through three quarters, mind you. That came a week after the Cardinals trailed to Purdue at halftime.

Yes, both games were away, and Louisville wound up winning both of them, largely behind Jackson’s dazzling skills. But shouldn’t a top-15 team — which Louisville’s ranking dictates they are — be beating teams like that more comfortably, even away from home? I would argue yes. Louisville is a top 25 team, but putting them up at 14 feels a bit too high for now.

6. Florida State (and Miami) dinged for no reason

Both the Seminoles and Hurricanes — and Florida Gators, for that matter — did not play this weekend due to the impacts of Hurricane Irma on the state of Florida. Florida State had already been hit after their loss to Alabama and the season-ending injury to quarterback Deondre Francois, but they were still a top ten team.

Until this weekend, anyway, when Florida State and Miami both dropped a spot in the AP Top 25 despite not playing (Miami actually got a bump in the Coaches Poll). Yes, this is how these things tend to work — teams that win are rewarded and sometimes teams that don’t play are blown past by no fault of their own. We certainly didn’t learn anything new about either of these teams this week, and both of their AP rankings were pretty fair — 10 and 16, respectively. They could have been left alone.

7. UCLA could use a bit more respect

The Bruins were only narrowly ranked in the AP Top 25 and remain unranked by the Coaches Poll despite an amazing win over Texas A&M and a convincing romp against Hawaii. Josh Rosen looks to be every bit as good as UCLA hoped he would be, and things look promising for the Bruins to make some noise in the Pac-12 race. If this keeps up, UCLA will be well on their way into the top 20.

It would be premature to put them there now, but the Bruins deserved better than narrowly squeaking into the rankings. Are these guys really any worse than a Tennessee squad that jumped two spots just for beating up on Indiana State? I say no.

Perhaps a more convincing win over Nebraska would have done the trick here, but the Ducks remain not only unranked, but the fifth team out in the AP and third team out in the Coaches. Maybe voters were unimpressed with the Ducks’ run-heavy strategy in the second half, which saw them shut out after halftime despite putting 42 on the Huskers in the first half.

That Oregon that blew Nebraska out of the building in the first half deserves to be ranked. Of course, whether that’s the real Oregon remains a matter of debate, but we now know they have it in them. They deserved a few more votes this week, but a convincing victory over Wyoming next week might be enough to get them into the top 25.

9. South Carolina needs a boost, too

The Gamecocks were nearly ranked this week, coming in at No. 27 in the AP Top 25, but still a number of votes shy of getting into the rankings. The Coaches have barely given them love, as they’re No. 31 in that poll. They have to be close to becoming ranked, and there’s a strong argument that they deserved to be there this week. South Carolina picked up their second Power Five win of the season, traveling to Missouri and coming away with a 31-13 win. That came on the heels of a 35-28 victory over NC State.

At this point, the Gamecocks look like they could make some noise in the SEC. While neither of the teams they’ve beaten are elite, they’re certainly decent wins for the program, and are rightfully gaining them some national attention. A top 25 berth should be in the cards with another win next week, and you could argue it will come a week too late.