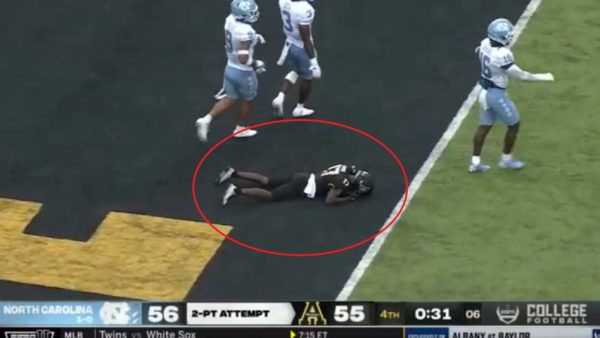 Appalachian State had a golden chance to upset North Carolina on Saturday, but they blew it on some missed 2-point conversions, including one really bad miss.

The Mountaineers were down 56-49 with under three minutes left. They drove 75 yards for a touchdown to make it 56-55 with 31 seconds left.

App State decided to go for 2 to try and take the lead. They drew up a perfect play and had a man wide open, but the ball sailed over the head of Dashaun Davis for an incompletion.

App State. Brutality. One you won’t forget about for a long time. pic.twitter.com/C5AHjpOCHy

But the game didn’t end there. App State decided to attempt an onside kick, which North Carolina recovered. Instead of falling on the ball to end the game, UNC returned the onside kick recovery for a touchdown. Though that extended their lead to 63-55, it still gave App State the ball back. The Mountaineers scored a touchdown with 9 seconds left to make it 63-61, and went for 2 again.

Unfortunately for App State, Chase Brice was stopped short of the goal to help North Carolina maintain the lead.

AFTER ALL OF THAT NORTH CAROLINA IS STILL GOING TO WIN pic.twitter.com/Yy1IxjE6Mz

Appalachian State tried yet another onside kick, but they were called for a penalty for having two players wearing the same jersey number (No. 9), giving the game to North Carolina.

What a wild ride, and what a missed opportunity for the Mountaineers.