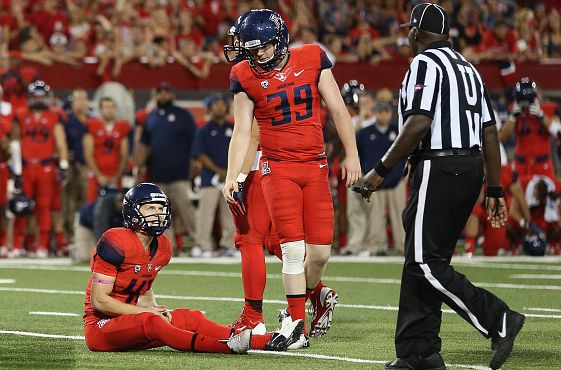 Arizona lost a heartbreaking game to USC on Sunday that ended with a missed 36-yard field goal. The young man who missed the relatively short kick, junior Casey Skowron, probably feels horrible for letting his team down. Do we really need people telling him they hope he gets cancer and dies?

As we know, Twitter can be incredibly cruel. Saturday night was certainly no exception. If you scroll through Skowrun’s mentions under his Twitter handle @CSkowron11, you’ll see what we mean.

@CSkowron11 you suck bro. Choke. Just one of three you missed and we win. Stay in school, nfl never calling.

Hey @CSkowron11 u couldn't even kick for our soccer team. Do us a favor and transfer so we can actually use ur scholarship on a real kicker

It should be noted that there were countless people who also showed support for Skowron after all the goons came out of the woodwork to trash him, but we’re surprised he has even kept his Twitter account active.

Unfortunately, this is not the first time we have seen people send death threats to a college kicker after an important miss. As messed up as it is, that’s the world we live in. Hopefully Skowron can turn the mindless tweets into motivation or ignore them altogether.