Fred Smoot provided a harsh assessment of Robert Griffin III during a radio interview on Monday, and he also introduced us to a great new nickname for Mike Shanahan.

Smoot, who is a humorous guy and does not mince words, said during an hour-long appearance with Holden and Danny on 106.7 The Fan in DC that RG3 has acted like a “brat.” The former Redskins defensive back also popularized a great new nickname for Shanny, whom he calls “Red Lobster.”

I wonder where he came up with that nickname? 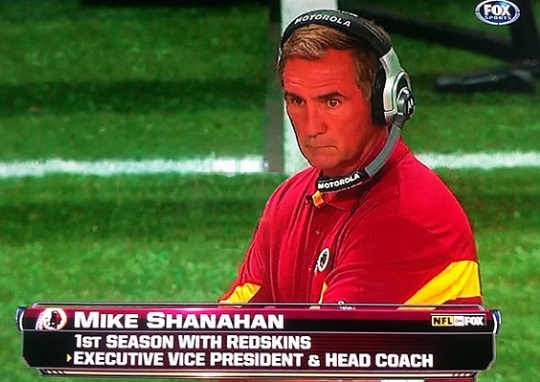 According to DC Sports Bog, which provided a transcription of some of Smoot’s comments, Smoot was critical of the relationship between RG3 and Shanahan. He said it was obvious the relationship was not working and that it’s headed for a divorce.

“If you’re going to make a coaching change for the future, it’s time to make it now,” Smoot said, via DC Sports Bog. “Robert Griffin III has been a Redskin now for one and a half years. If you’re gonna change his coach and you want a coach to grow with him like the Bradys and Belichicks and all the great pairs of quarterbacks and coaches, you have to do it now. And right now, I think the Red Lobster’s working his way outta here. I think Shanahan is working his way out of here.”

Smoot says it’s obvious that Shanahan, RG3, and Dr. James Andrews all don’t get along. Dr. Andrews performed the knee surgery on RG3 and has been advising the entire rehab. Smoot thinks they need to bring in new coaches after the season.

“It’s a problem that no one wants to talk about,” he continued. “RGIII and Shanahan don’t get along. They the couple that we invite to dinner and they always arguing. We know this couple don’t have a chance. It won’t be a year or two before they talking about divorce and it’s not gonna shock any of us.”

Smoot went on to say RG3 and Shanahan are “not compatible right now” and that the Red Lobster has lost the locker room. He also spoke harshly about Griffin.

“It’s about time somebody be honest,” Smoot said. “Sometimes RGIII can be a brat, alright? Because I’m watching these other quarterbacks and I’m watching how they compose themselves and the things they do. With (Andrew) Luck and (Russell) Wilson, and it’s a different vibe. Sometimes I’m starting to think that RGIII is really really buying into the attention. But I tell anybody this. The NFL will humble you. And I think he’s going through that humbling process right now as we speak.”

First off, I absolutely love the Red Lobster nickname for Shanahan and may have to adopt it. Secondly, I agree it’s obvious there is friction between Griffin and Shanny, but I would wait the season to see what happens. The two did have success last season until the injury, which Shanahan completely mismanaged. Lastly, I agree with Smooth that Griffin has been somewhat bratty. I think he definitely was feeling himself a little too much after his great rookie season. I also think he could have kept his mouth shut more frequently during his rehab and training camp. His comments caused a lot more drama than was necessary, and he needs to realize that.