Tom Brady subject of joke on billboard near Buffalo 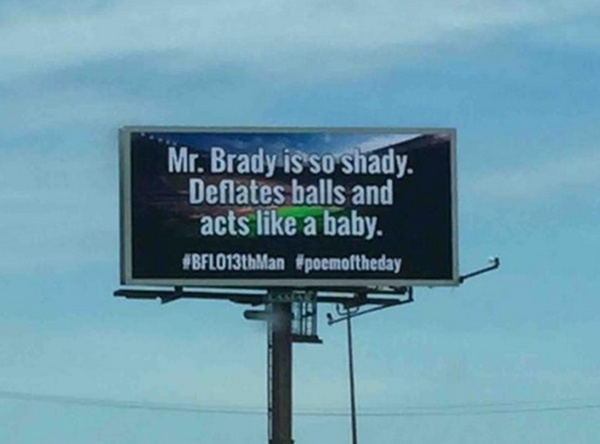 The Bills welcome the Patriots to Ralph Wilson Stadium on Sunday for an AFC East division clash. That means plenty of Deflategate jokes western New York, and that includes a signage.

The above pictured billboard that reads “My Brady is so shady. Deflates balls and acts like a baby” can be seen on the way into Buffalo ahead of Sunday’s matchup. A little closer to the stadium, at the Bills official team store, a display of air pumps and footballs can be found.

Buffalo is clearly ready for the Patriots and Bills head coach Rex Ryan is expecting the atmosphere to be “as loud as any game I’ve even been at in my life.” Marcell Dareus added a little fuel to the fire with his “nobody likes that Patriots” comment. The ingredients are there for what should be a game worth watching on Sunday.

The Patriots have ruled the AFC East in recent memory, but that isn’t stopping Ryan, his team, and the fan base from thinking this year will bring different results. The biggest question surrounding the Bills leading up to the season was the quarterback position. With Tyrod Taylor looking impressive in week 1, confidence around Buffalo is rising, as evidence by the willingness to poke the sleeping bear that is Tom Brady and the Patriots.