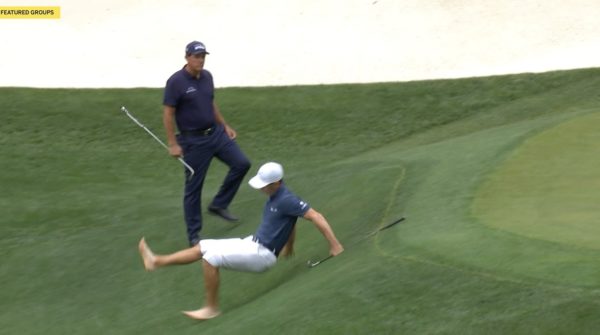 Billy Horschel did not have a fun time negotiating the 13th hole at Augusta National in the third round of The Masters on Saturday.

Things started badly for Horschel on the 13th, as he hit his approach shot into Rae’s Creek. Horschel decided to play the ball from the water, and took his shoes and socks off to get ready to go in.

Unfortunately, as he was surveying the shot, Horschel slipped and fell down the slope.

OPE Billy Horschel having quite the adventure on 13 pic.twitter.com/AL3xvXiIE4

Fortunately, Horschel was able to laugh it off along with the crowd. And believe it or not, he pulled off a pretty solid rescue from the water afterwards, too.

What a water save by Billy Horschel! #Masters2021 pic.twitter.com/vUsxNmO6hJ

Horschel was +2 on the day after the 13th, leaving him +5 overall and tied for 51st. He can at least take solace in the fact that sometimes it even happens to the best in the world.