Ilya Bryzgalov is afraid of bears in the forest, not Penguins (Video) 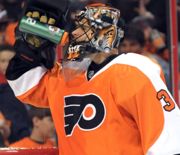 Ilya Bryzgalov is known as much for the things he says during interviews as the saves he makes while in net. For that reason, we were not surprised by the response he gave on Monday when asked what the biggest threat is that the Flyers’ first-round opponents can bring. But the look Bryzgalov had on his face when he told reporters that he was afraid of bears in the forest and not Penguins seemed a bit serious — even for a master of humor like Ilya. According to Eye on Hockey, that’s because the Philadelphia goalie knows someone who was attacked and killed by a bear.

That’s obviously not a laughing matter, but I have no idea why Ilya answered the question that way. For starters, the reporter didn’t even ask him if he was afraid of Pittsburgh. He just wanted to know what type of threat they pose. The bear comment was pretty much forced in there. Maybe the person who was killed by the bear was on Bryzgalov’s mind and he felt like venting about it. Happens to the best of us.