The Brooklyn Nets signed free agent point guard Jeremy Lin to a three-year deal on Friday, less than 24 hours after waiving veteran point guard Jarrett Jack. It would appear that Jack found the roster moves to be hilarious.

Shortly after Lin announced on Twitter that he is now a Net, Jack tweeted the following:

Of course, the 32-year-old immediately backtracked.

If Jack was laughing at something else, that is one incredible coincidence.

Jack averaged 12.8 points and 7.4 assists while playing just over 32 minutes per game last season. Lin played just over 26 minutes per game with the Charlotte Hornets, averaging 11.7 points and just 3.0 assists. Lin shot only slightly better from the field at 41.2 percent compared to Jack’s 39.1 percent.

The Nets could have kept Jack for $6.3 million next season, but they have instead chosen to pay Lin double that. Since Lin is five years younger, the move is more about potential going forward.

This isn’t the first time a fellow NBA player has been critical of how much Lin gets paid. Sounds like jealousy to me.

Jeremy Lin has signed with the Brooklyn Nets.

Lin, who spoke earlier this offseason about how he wants to find a home where he can stay a while, announced the move on his Twitter account Friday morning.

Adrian Wojnarkowski of The Vertical reports that Lin’s contract is a three-year, $36 million deal with a player option for the third year.

Lin has yet to rediscover the incredible magic of Linsanity that he brought us while he was with the New York Knicks, but that hasn’t stopped him from finding work. The Nets will be his fifth NBA team in six years.

After bouncing around the NBA, Jeremy Lin wants to land somewhere where he’ll be staying for a while. It’s appearing likely that that place will not be New Orleans.

Lin told the World Economic Forum that he wants to find a permanent home, as well as a team that can maximize his potential.

“I want to see how good I can become. I’m 27, and an athlete’s prime, or at least in the NBA, your prime is usually 27-30. That’s when you kind of peak physically (and) mentally and that’s where most players perform their best. So I’m going into my prime and I want to see how great I can be as a player, and that’s my purpose in free agency — so I’ll just exhaust every opportunity to see which one will be the best for me.”

According to ESPN’s Chris Broussard, the Hornets would like to keep Lin, but other priorities and the fact that they don’t own Lin’s Bird rights may make that impossible. Charlotte is prioritizing the re-signing of Nicolas Batum and Marvin Williams, and they might not have the cap space to retain Lin even though they’d like to.

Lin is said to have meetings with three teams in the works, but there is no word on who the interested parties are. The Knicks will not be one of them, as they reportedly weren’t all that interested even before acquiring Derrick Rose.

The New York Knicks may be hunting for a point guard this summer, but don’t expect Jeremy Lin to be on their shopping list.

Coach Jeff Hornacek implied that he wanted the Knicks to bring in a point guard to cover for injury-plagued Tony Wroten and aging Jose Calderon, but there are not a ton of options on the free agent market, with the team distancing themselves from some of them already.

According to Marc Berman of the New York Post, Jeremy Lin is unlikely to return to the Big Apple as they consider his defense too weak. Ty Lawson has also reportedly been ruled out due to fears about his off-court issues.

All eyes then turn to the consensus top two set to hit the market: Mike Conley and Rajon Rondo. The Knicks have been linked to Conley in the past, but there are indications that he would prefer to stay in Memphis. Rondo is a favored choice of Carmelo Anthony, but Berman reports that some in the organization believe he keeps the ball in his hands too much to work in the team’s offense.

Alas, whatever the case, Linsanity sounds as though it’s well and truly finished. May it rest in peace.

The NBA has responded to a viral video that shows some hard fouls Jeremy Lin has received and the lack of proper response from officials some fans feel was in order.

Lin is four years removed from the “Linsanity” phenomenon that swept New York during the point guard’s surprising run of dominance with the Knicks. But he has found a home with the Charlotte Hornets this season and is averaging 11.7 points, 3.2 rebounds and 3 assists per game. However, he may not be receiving the proper respect from officials that he deserves.

A Lin fan put together this video and uploaded it to YouTube last week. It shows many hard fouls Lin has received this season and how similar they are to plays that were called flagrant fouls in other circumstances. The video has received over 800,000 views since it was uploaded.

The Charlotte Observer took note of the video and asked Lin about it. Lin said he had watched it after many friends shared it with him, but he downplayed the video.

“It is what it is. I just want to keep playing hard,” Lin said via The Observer. “It’s one of those things where I made a rule of myself halfway through the season that I’m not going to argue with refs. Whatever happens, happens. It helps me stay focused on basketball.”

Lin joked that the video may have impacted officiating in his most recent game. He was sent to the free throw line 10 times on Monday, which tied for his second-highest amount of the season (he made all 10). The NBA apparently took note of the video, too.

A fan relations employee sent a response to the fan who uploaded the video, saying the plays were reviewed:

“Contact that is deemed flagrant by referees and other hard contact (whether called or not) is reviewed by Basketball Operations after each game. During its review, Basketball Operations uses a set of criteria (which you can find here), multiple video angles and enhancements, and its comparable database to calibrate its judgment. When deemed appropriate, a postgame Flagrant Foul can be assessed (including for contact that was not called in the game), and applicable points, warnings, fines and/or suspensions are issued.

“While some of the plays in the video you referenced involved hard contact, none was subsequently deemed a Flagrant Foul given the full circumstances, angles and comparables from past games. Referees do make mistakes, which means they miss calls that should have been made. When that occurs, we collect the data and provide referees with feedback to ensure improvement.”

Maybe Lin wasn’t receiving the respect he deserves and this video will help him achieve that. And Lin’s response isn’t too surprising either; the man is used to disrespect coming in multiple forms.

Jeremy Lin gets videobombed by Nelly after Hornets win (Video) 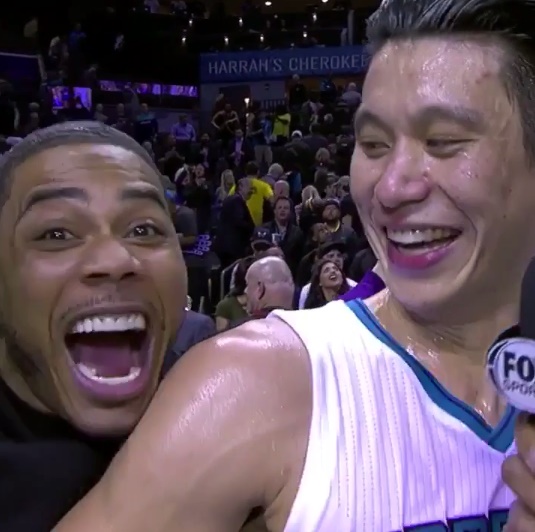 The Hornets turned a 23-point deficit into an improbable 91-88 win on Monday and Jeremy Lin had a lot to do with it.

Charlotte scored just seven points in the first quarter and was down 51-36 at halftime to the Spurs, who looked like they would comfortably be on their way to another victory. However, the Hornets had other ideas.

Courtney Lee scored 14 points in the third quarter and Lin took over in the fourth, dropping 15 of his 29 points in the final period. The end result was the largest lead surrendered by the Spurs since Tim Duncan was drafted in 1997.

After the game, Lin received a well-deserved ice water shower during his interview with Dell Curry. He also received a visit from Nelly.

It wasn’t quite Linsanity again, but it wasn’t far off. And, that the Hornets comeback was against the Spurs makes it that much more impressive and completely justifies Nelly temporarily going crazy. During February 2012, Jeremy Lin was the toast of the NBA and New York, sparking a craze that became known as “Linsanity” following a string of impressive performances by the undrafted point guard from Harvard. Now, he’s apparently having a hard time convincing NBA employees who he is.

After spending last season with the Lakers, Lin signed a two-year deal with the Hornets this summer. When he showed up to the Time Warner Cable Arena for the first time, Lin had to convince a member of security staff he’s actually a player on the team.

Went to the Hornets arena for 1st time and tried convincing security im a player. She said, "what team?!?" lollll #everywhereigo #literally

That must have been pretty awkward, to say the least. Remembering how big Lin became during his time with the Knicks, it seems crazy he could go to an NBA arena and not be recognized. But, here we are.

After playing in big cities like New York, Houston, and Los Angeles, a smaller market like Charlotte may turn out to be a good thing for Lin. He can continue his career without the super intense media scrutiny that comes with larger cities, not to mention the added pressure. Perhaps he can even remain relatively anonymous, as hard as that is to believe.