END_OF_DOCUMENT_TOKEN_TO_BE_REPLACED

Jose Altuve says he was not mean-mugging Donald Trump Jose Altuve stole the show when the Houston Astros visited the White House on Monday to be recognized for winning the World Series, and the reigning AL MVP insists it was not intentional.

Several photos and videos showed Altuve standing behind Donald Trump with a very serious look on his face while the president was delivering his speech. On Tuesday, Altuve said it was an “honor” to be at the White House and said he was just trying to be respectful.

Jose Altuve spoke to reporters today about the reaction to his expression during yesterday’s White House visit. "The president was talking. What do you want me to do? I was just standing there listening. It was an honor to be there. If I didn't want to go, I just wouldn't go."

More Altuve: "I'm (standing) behind the president, probably one of the most important guys in the world. I can't be laughing or doing stupid things while he's talking. I need to listen."

The internet, of course, drew its own conclusions about what may have been on Altuve’s mind. Many felt Altuve’s body language was his way of making a political statement, and there was one very awkward moment where it appeared Trump intentionally skipped over Altuve while dishing out handshakes.

It’s possible that Altuve disagrees with Trump’s policies, but that doesn’t mean his facial expressions on Monday were indicative of that. If he felt strongly enough about not going, he would have stayed home like Carlos Correa.

Championship team visits to the White House have become a little bit more newsworthy these days, and that was certainly true once again this week.

The World Series champion Houston Astros visited President Donald Trump at the White House on Monday, and it was highlighted by some awkward moments that Astros star Jose Altuve had with the commander-in-chief.

The reigning AL MVP stood behind Trump for the balance of the ceremony and was photographed with some rather meme-worthy facial expressions.

Oh, the Jose Altuve deathstare images are getting even better.

Jose Altuve looks like he'd rather be anywhere else. pic.twitter.com/Gj8WEnfR2X

An uncomfortable moment also ensued when Trump shook hands individually with the members of the Astros and appeared to skip right past Altuve.

I'm okay with Altuve going for the sake of this moment: pic.twitter.com/gDl5q8wxeJ

Not to worry though — a Trump-Altuve handshake eventually happened … it just descended into a bizarre arm wrestle of sorts before Trump cracked a joke about Altuve’s height and then seemed to nearly lose his balance.

This was, of course, gold material for the Internet, and the jokes soon arrived.

Jose Altuve having the time of his life at the White House. pic.twitter.com/L6YfP7qLYQ

Beltran and Correa: "Jose, just don't go."
Altuve: "I should be there. I'm the leader of this team."
*a few hours later* pic.twitter.com/CaMUyM139l

END_OF_DOCUMENT_TOKEN_TO_BE_REPLACED

Jose Altuve and Joel Embiid are just another reminder that incredible athletes come in different sizes.

The two attended the 2017 Sports Illustrated Sportsperson of the Year award ceremony on Tuesday night in Brooklyn. They posed next to each other for a photo that also included JJ Watt and Carlos Beltran. Take a look::

Sports Illustrated’s Rising Star of the Year @JoelEmbiid arrives to the @SInow Sportsperson of the Year Awards! pic.twitter.com/LEFNAspDHa

Embiid is 7-feet tall, while Altuve is listed at 5-foot-6, which is why he only comes up to Embiid’s midsection.

Altuve and Watt were named SI’s Sportsperson of the Year for what they did for the city of Houston. Watt helped raise $37 million for Hurricane Harvey relief in Houston, while Altuve helped lead the Astros to a World Series title with an MVP season.

As for Embiid, well he was named SI’s Rising Star of the Year. And their photo is probably even better than the one of Altuve next to Aaron Judge. 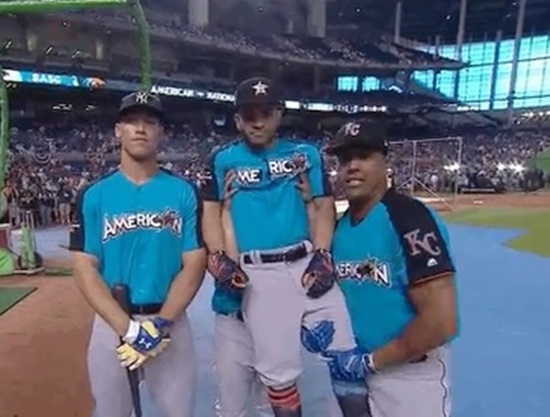 The runner-up in this year’s American League MVP Award voting gave the deserving winner a shoutout on social media not long after the announcement was made.

To cap off a great season, Jose Altuve added AL MVP honors to winning a World Series on Thursday. During the regular season, the Astros second baseman led the league in batting average and hits in addition to hitting 24 home runs and stealing 32 bases.

Altuve picked up 27 of a possible 30 first place votes to capture the award for the first time in his career. Aaron Judge, who finished in second place, was gracious in offering congratulations to the winner.

M-V-P!!! Nobody more deserving than you!! Congrats on an unforgettable 2017!! @JoseAltuve27 pic.twitter.com/tEMy9u8qGc

In another year, Judge may have taken home the award with his .284/.422/.627 batting line to go along with 52 home runs and 114 runs batted in, both of which led the American League. At just 25 years old, this will likely not be the last time Judge is in the MVP discussion. Although, Altuve doesn’t show any signs of slowing down himself. Justin Verlander and Jose Altuve already have professed their love for one another this postseason. Now they have the T-shirts to prove it.

Check out the shirts the two were wearing for a photo snapped inside the team’s clubhouse. Altuve posted the photo on Instagram Sunday:

Love is in the air … ready for game 5

The funny shirts trace back to Game 7 of the ALCS, which the Astros won over the New York Yankees. In an interview after the game, Altuve said he literally loved Verlander. The feeling between the two is clearly mutual.

FYI: You can get the shirts at a website called breakingt.com. Here is the link for the Love Altuve shirt and for the Love Verlander shirt. As soon as Kenley Jansen blew the save in Game 2 of the World Series, the Los Angeles Dodgers were toast.

Houston’s bats exploded late in Game 2 on Wednesday night. They score two runs off Jansen, handing him his first earned run and blown save of the postseason on a solo home run in the ninth by Marwin Gonzalez to tie it in the ninth. With the tough part — scoring off Jansen — out of the way, the rest came easy.

Jose Altuve led off the top of the 10th inning for the Astros with a solo home run off Josh Fields.

JOSE ALTUVE FOR THE LEAD! https://t.co/0QfjirPq9o

Carlos Correa followed with a solo shot that traveled further up the bleachers to make it 5-3 for Houston.

A team that looked dead in the water down 1-0 in the series and needing to score two runs off Kenley Jansen turned the series around with some clutch hitting with the late-game long ball. They also made some history in the process. Jose Altuve was not happy with home plate umpire Phil Cuzzi for calling him out on strikes in the top of the fourth inning of Game 1 of the World Series at Dodger Stadium on Tuesday night.

Hits were tough to come by for the Astros against Clayton Kershaw, and it certainly didn’t help them when borderline calls went the Dodgers’ way. That was the case when Altuve was called out on strikes on a breaking ball low in the zone with a full count.

Altuve protested the calls he received, including the strikeout call on the 3-2 pitch that was low.

Joe Buck declares “painted corner” on called strike 3 to Altuve… Fox doesn’t show the digital strike zone?. So I will. This is BALL 4. pic.twitter.com/UNb4l0XCXj

Sure, Kershaw’s breaking balls drop a lot, so where the pitch crosses the plate is higher than where the catcher receives the ball, but that pitch was still low.

Altuve tried to make up for that call with a single in the 7th, one of the few hits the Astros managed off Kershaw.