Randall Cobb left Saturday’s preseason game for the Packers after suffering a shoulder injury while attempting to make a catch against the Eagles.

Cobb left the field after rolling on his shoulder. The team announced his injury.

Medical expert David Chao, who used to be an NFL team head physician, ran down the scenarios for Cobb’s injury.

This is the last thing the Packers needed after Jordy Nelson went down last weekend. Cobb is fully capable of stepping up and becoming the team’s top target, but that picture is not as clear if both of their top receivers are out. Additionally, Bryan Bulaga left the game with an ankle injury.

Randall Cobb will be returning to the Green Bay Packers after the team ponied up to keep their talented wide receiver.

ESPN’s Adam Schefter reports that Cobb is receiving a four-year, $40 million contract from the team that drafted him in the second round in 2011. NFL Media’s Ian Rapoport says $17 million is guaranteed.

Cobb first made a difference for the Packers mostly on special teams as a rookie, and since then he has established himself as one of the most talented receivers in the league. He caught 91 passes for 1,287 yards and 12 touchdowns last season.

Cobb will be making slightly more money than teammate Jordy Nelson, who signed a five-year, $43 million contract with the team last offseason. Between the two, the Packers will have around $19 million a season tied up to their playmaking wide receivers.

The Colts, Raiders and Texans were among the teams said to also have had interest in Cobb.

Randall Cobb gets ketchup on him during Lambeau Leap (Video)

Green Bay Packers wide receiver Randall Cobb caught his eighth touchdown of the season on Sunday, which leads all NFL players not named Julius Thomas. Naturally, Cobb celebrated the score with the Lambeau Leap. The end result was a condiment-covered shoulder.

Players who partake in the Lambeau leap are always at risk of having beer, soda, ketchup, or worse dumped on them. Cobb happened to jump right in front of a fan who had a big ole wad of ketchup sitting on top of his basket of french fries, and someone knocked a dollop of it onto the star receiver’s shoulder.

We know the equipment manager wasn’t scolding Cobb for the stain, but it’s fun to pretend. 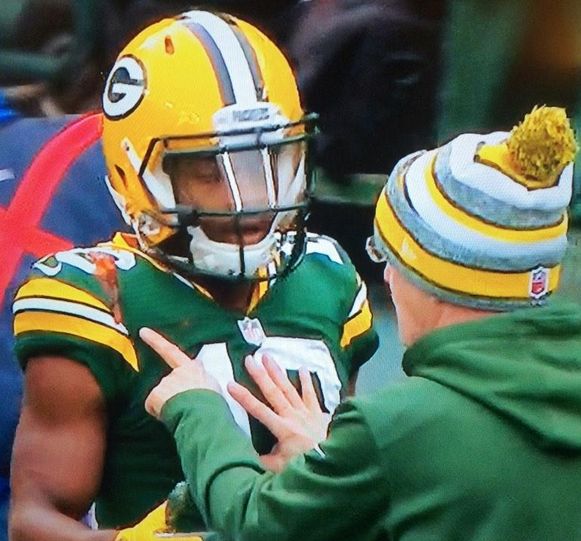 Hey, at least Cobb was able to elevate enough to execute the Leap. That’s more than some of his teammates can say for themselves.

The two players who returned for Green Bay in Week 17 after missing several weeks because of injuries combined for the touchdown that sent the Packers to the playoffs.

The Packers were down 28-27 to the Chicago Bears with the NFC North on the line and had a 4th-and-8 from the Bears 48 in the final minute. Aaron Rodgers eluded the rush, rolled to his left, and found Randall Cobb wide open for a 48-yard touchdown pass to give the Packers a 33-28 lead.

Though they missed the 2-point conversion attempt, the Packers held strong and intercepted Jay Cutler on the final play of the game to win it 33-28 and receive a berth into the playoffs.

Rodgers finished 25-of-39 for 318 yards, 2 touchdowns, and 2 interceptions. Cobb, who returned from a fractured leg, caught both of the TDs. Randall Cobb could be back for Packers

The Green Bay Packers are shaping up to potentially be one of the more dangerous teams entering the NFL playoffs.

Not only did the Packers announce that Aaron Rodgers will start the Week 17 contest against the Chicago Bears with the NFC North on the line, but head coach Mike McCarthy indicated that Randall Cobb could return as well.

The Packers’ official Twitter account tweeted that McCarthy said Cobb had a “very good” day of practice Thursday and that he took a positive step.

Cobb was placed on the injured reserve/designated to return list after fracturing his leg on a low hit by Baltimore Ravens DB Matt Elam in Week 6. He practiced in pads on Thursday and NFL Network’s Ian Rapoport says there’s a “real chance” he could be activated for the game.

We don’t advise you to pick him up in fantasy for Week 17 because we doubt he would play a great amount of snaps, but his return would be a huge boost for Green Bay. He is one of their biggest playmakers and a threat to score any time he touches the ball.

With him and Rodgers back, Green Bay would be up there with the Seahawks, 49ers, Panthers and Saints as teams that could make a Super Bowl push. Randall Cobb was a revelation for the Green Bay Packers Thursday night. Playing his first career game, the rookie second-round pick out of Kentucky scored two touchdowns. He tied an NFL record by returning a kickoff 108 yards for a touchdown, somehow managing to avoid touching the ground when he was almost certainly down. That kickoff return for was one of the difference-makers because it turned the contest into a two-score game.

Cobb also scored late in the first quarter on a short in from the slot. He took the pass, made a sweet move on the safety, and then laid down a stiff arm before diving into the end zone. Cobb played great and he was a big reason the Packers won the game. He certainly is talented, but don’t let the praise he’s received a day later persuade you to grab him off your waiver wire.

Cobb isn’t one of Green Bay’s regular receivers. He only caught two passes in the game. Greg Jennings is their top target, Jermichael Finley and Jordy Nelson are generally the next options, and Donald Driver is also ahead of him on the depth chart. That doesn’t even count receivers James Jones and Tom Crabtree who enter the game when Green Bay really wants to spread things out. Recognizing that Cobb is extremely talented, the Packers may utilize him more as the season goes on but don’t get carried away after one game; Cobb is a really good player, but he likely won’t be a fantasy asset this season.