Manu Ginobili and Tim Duncan still have quality banter all these years later.

The San Antonio Spurs announced on Monday that Duncan, the retired five-time champion, would be joining coach Gregg Popovich’s staff as an assistant along with former team video coordinator Will Hardy. Ginobili had a hilarious reaction to the news, choosing to focus exclusively on the Hardy angle.

Awesome news! So happy for him!

Always knew Will Hardy was gonna make it to the front of the bench! https://t.co/PWI6adr4Ck

Ginobili and Duncan were, of course, two-thirds of San Antonio’s famous Big Three along with Tony Parker. In their 14 seasons together as teammates, the two players won four titles. They also made a combined 17 All-NBA teams and 17 All-Star teams for their NBA careers, which were all spent with the Spurs.

Tim Duncan is returning to a more active role with the San Antonio Spurs.

The team announced Monday that Duncan, the franchise’s best-ever player, will join Gregg Popovich’s staff as an assistant coach next season.

In a statement announcing the hiring, Popovich contributed a typically hilarious quote about Duncan’s return.

The San Antonio Spurs today announced that Will Hardy and Tim Duncan will be added to Gregg Popovich’s bench as assistant coaches. “It is only fitting, that after I served loyally for 19 years as Tim Duncan’s assistant, that he returns the favor,” said Popovich.

Duncan retired in 2016 and has remained with the Spurs in a behind-the-scenes role, but this will put him back on the bench at Popovich’s side. At the time of his retirement, Popovich offered Duncan free reign to coach in whatever capacity he wanted, and now he’s getting a more prominent spot in the organization. Draymond Green is once again sharing his story of trying to trash-talk Tim Duncan, and it never gets old.

Green spoke with ESPN The Magazine’s Sam Alipour for an interview appearing in the magazine’s NBA preview. During their interview, Alipour calls Green the best trash-talker in the game. Green proudly agreed and was asked who’s impervious to his trash talk. That’s when he brought up Duncan.

“The guy I’d never waste my breath on? Tim Duncan,” Green told Alipour. “As a rookie, I tried talking junk to Tim, and he was like a tree staring back at me. [Laughs] No expression. I said, ‘All right. It’s over.’ Never talked junk to him again. After that, anytime he fell, I’d be the first person to help him up, like I was his teammate. [Laughs] I also tried talking junk to Kobe [Bryant], maybe my second year. On a potential game winner, Mark Jackson put me in to guard him, and I got the stop. I said, ‘Yeah, I’m locking that s— up!’ He looked at me like I was crazy and said, ‘That miss ain’t got nothing to do with you. Sit down.’ I said, ‘Oh, s—! All right, I’m out.'”

The entire interview is fantastic. Green also talks about trash-talking Stephen Curry in practice, clashing with Kevin Durant and Steve Kerr, and how the Golden State Warriors would stack up with past dynasties.

But the Tim Duncan story is great. Green can trash talk anyone and throws so many guys off their game. Yet when it came to Duncan, Draymond realized he was barking up the wrong tree. It’s a story Draymond’s been sharing since 2015, and we love it no less.

Tim Duncan continues to rack up the victories even in retirement.

Duncan settled his lawsuit with his former financial adviser to the tune of $7.5 million, which allowed him to recoup some of the money he lost while being defrauded by Charles Banks.

Duncan’s attorney only looks at the settlement as a small win.

“I wouldn’t say this makes him whole,” Richard C. Danysh, one of Duncan’s attorneys, said via the San Antonio Express-News “But given the amount of time expended by Mr. Duncan and his lawyers and the courts, the amount of money spent chasing this fellow, and Mr. Banks’ statements that he doesn’t have any (more) money, it seemed like the wise thing to do — bring it to a conclusion.”

Duncan now is dropping two federal lawsuits he had filed against Banks.

Duncan met Banks in 1998 when the adviser was working for an investment firm. He had convinced Duncan to invest in a cosmetics company that lost money. He also convinced Duncan to loan $7.5 million to a company where Banks was a chairman and personally benefited from the loan.

In June, Banks was sentenced to four years in prison for wire fraud. Duncan only discovered the financial issues while diving assets during his divorce.

Tim Duncan is widely seen as the greatest Spur of all-time after playing his entire 19-year career in San Antonio and bringing them five titles. But it turns out that Clippers coach Doc Rivers may have played a big part in that legacy.

In the third quarter of the Clippers’ win over the Phoenix Suns on Wednesday, Clippers analyst (and longtime teammate of Duncan’s on the Spurs) Bruce Bowen revealed a bombshell of a story during the broadcast on FOX Sports Prime Ticket. He said Duncan considered signing with the Orlando Magic as a free agent in 2000, but Rivers, then the coach of the Magic, denied Duncan’s request to have family ride on the team plane and lost him from there.

Bruce Bowen's story about the Magic losing out on Tim Duncan in free agency because Doc would not let family on the team plane (h/t @Wells_P) pic.twitter.com/t66Fj0mbfV

“When Tim went out to meet with Orlando, he asked this question, ‘Can family come on the flights to some games?'” said Bowen. “And from what I understand, Doc said ‘No,” and that’s where he lost Tim Duncan.”

Indeed, it was just last year that Mike Bianchi of the Orlando Sentinel shared an article he wrote about just how close Duncan came to signing with the Magic in that fateful summer of 2000. He essentially confirmed Bowen’s story that the strict policy from Rivers about team flights was a deal-breaker for Duncan. The forward wanted to bring his longtime girlfriend on some flights, which is something Gregg Popovich apparently accommodated.

Of course, Duncan returned to the Spurs and won four more championships with them after his first in 1999, cementing his legacy as an all-time great and helping establish San Antonio as the NBA’s model franchise. As for Rivers, this might not be the first time he cost one of his teams a top player. 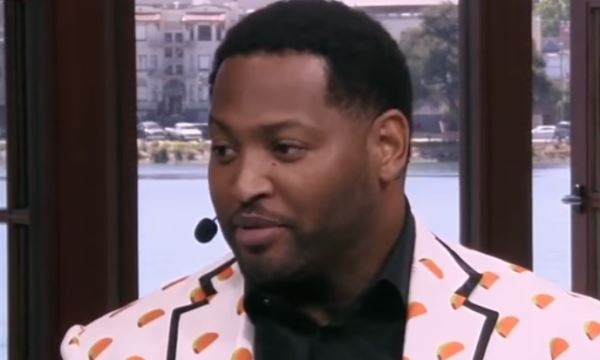 Hakeem Olajuwon and Tim Duncan are largely interchangeable in most rankings of the greatest big men to ever play the game, but one former player who was teammates with both of them certainly doesn’t think so.

Seven-time NBA champion Robert Horry appeared on ESPN’s “The Jump” on Monday and said that Olajuwon was “20 times better” than Duncan.

“I don’t think people understand how good Olajuwon was,” he went on. “I always tell people you judge a player by what they cannot do. Who would you want at the free throw line at the end of a game: Dream or Tim Duncan?”

It’s really a matter of pick your poison. Olajuwon was the more physically dominant and versatile player, while Duncan was more fundamentally sound and a better leader. Both are all-timers who were more than capable of being the alpha dog on a title team, so despite Horry’s fondness for hot takes, there probably isn’t a wrong answer between the two legends. Duncan again had some pointed words for his former teammate’s attire on Wednesday, which Elliott was good enough to share with the world. Apparently, he looked like Steve Urkel.

Tim Duncan told me "it looks like you're taking Laura Winslow out tonight" and then sends this. #GoSpursGo #Spurs pic.twitter.com/fTfyFWeN3l

Duncan has really taken to watching Spurs broadcasts and heckling Elliott. This is already the second time in the young NBA season he’s done it. It turns out that, most likely, this side of Duncan has been there in a low-key way all along. Sean Elliott received a hilarious text message from Tim Duncan and shared it with the world on Thursday.

Elliott spent 12 seasons in the NBA, mostly with the Spurs. Now, he’s a member of the broadcast team. While calling Thursday’s game against the Kings, Elliott received a text message from his former teammate, who was watching the game. Duncan said Elliott looked like a “burnt earthworm with glasses.”

Timmy's text messages to Sean ? (turn your volume up) pic.twitter.com/JRORU1I1BM

Is Duncan right? One thing we do know is he certainly has a sense of humor. The future Hall of Famer once got ejected by Joey Crawford for laughing at him from the bench.

Duncan played with Elliott for the final four seasons of Elliott’s career. One can only imagine what was said that we’ll never know about.

Gregg Popovich: Tim Duncan will be ‘coach of whatever he wants’ for Spurs

Though he’s retired from playing, Tim Duncan will still be involved with the San Antonio Spurs this season.

According to coach Gregg Popovich, Duncan’s role will essentially be whatever he wants it to be.

Pop says Duncan will have an official role with Spurs this season: "Coach of Whatever He Wants to Be."

Duncan has every right to choose what he wants to do after the career he had with the Spurs. We’ve heard it may have less to do with coaching and more to do with personnel. Whatever it is, don’t expect it to demand much of the spotlight. He wouldn’t have it any other way. Dirk Nowitzki knows he’s nearing the end of his NBA career, and he has an idea of how he’d like to go out.

Nowitzki spoke to SI’s Beyond the Baseline podcast and when asked if he’d rather go out like Kobe Bryant or Tim Duncan, the Mavs big man had an interesting response.

“You know, I loved the way Kobe went out … with a 60-point game? That’s so Kobe like,” Nowitzki said, via SportsDay. “The whole arena was standing up the whole fourth quarter. So much fun to watch. But I’m more like a Duncan guy. More a quiet guy. I don’t need the limelight as much. Maybe not quite the just e-mail, Hey, by the way Tim Duncan is retiring. I thought that was a little low profile. Maybe there’s a little press conference or something. I don’t know, I don’t really want to think about it because I know it’s gonna come up soon anyway. I’m just gonna enjoy the last couple of years.

Duncan retired as quietly as he played. Nowitzki is known as a quiet guy who goes about his business, so it’s not a big surprise that he’d prefer to take the Duncan route into the sunset.