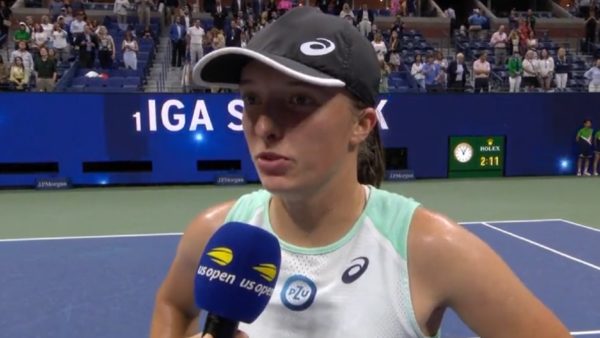 Iga Swiatek had a “TMI” moment during her post-match interview on Thursday night.

Swiatek came back to beat Aryna Sabalenka 3-6, 6-1, 6-4 to advance to the finals of the US Open. The Polish star lost the first set pretty badly, getting her serve broken three times.

Swiatek took a bathroom break after the first set, and came out a new player. She routed Sabalenka 6-1 in the second set and then came back from down 4-2 in the final set to win.

In her post-match interview, Swiatek was asked about the bathroom break, which seemed to turn her momentum. She was embarrassed about what she said in response.

What Iga did in the bathroom 😆
"For sure I felt lighter, sorry that's digusting" pic.twitter.com/9bfz6nzPwa

“It’s more what I did (in the bathroom). I kind of needed to go. For sure I felt lighter. Sorry, that’s disgusting,” Swiatek admitted.

Yes, that was too much information from Swiatek. But she may have also wanted to assure doubters that her bathroom break was used for legitimate purposes rather than to hurt Sabalenka’s momentum. Even if the break was used for real reasons, Swiatek made the most of it.

Not only was her second-set rebound impressive, but so was her comeback in the third set. She will fans Ons Jabeur in the finals.