Drake may not physically be able to be with the Toronto Raptors as they defend their NBA title, but he is still finding a way to make his presence felt.

The Canadian rapper, who is perhaps the team’s most famous fan, sent some interesting gifts to them in the Orlando bubble. Multiple Raptors players, including Pascal Siakam, Stanley Johnson, Terence Davis, and Chris Boucher posted pictures to their Instagram Stories this week of customized candles that they had received courtesy of Drake and his record label OVO.

drake & ovo sent room candles to each of the @raptors 🕯🕯 @drake pic.twitter.com/CYzkTNepYM

Drake, who also has an official role as the team’s global ambassador, has long been a fixture in the front row of Raptors games. During last season’s championship run, he went viral for a number of funny in-game antics.

While this year’s postseason will obviously look a lot different, rest assured that the Raptors will still be able to feel Drake’s presence in their hotel rooms when they put on “Take Care” and take a whiff of their scented candles. Andrew Yang is very much ready to trust the political process.

During an interview this week on “The Rights to Ricky Sanchez” podcast, the Democratic politican said that he would like former Philadelphia 76ers GM Sam Hinkie to be in his cabinet if he ever becomes president.

“One of the fun things about being president is you get to meet a lot of the folks you look up to and admire in other contexts,” said Yang, per WIP-FM in Philly. “And Sam Hinkie is one person I haven’t had a chance to meet, and I’d enjoy that because I feel like that guy should be put in charge. I’ll actually make this pledge, to you and your audience … if Andrew Yang becomes president, I’m going to put Sam Hinkie in charge of an entire freaking, department, agency, in the government.

“People will be like, ‘Andrew, what does Sam Hinkie know about national security, or the department of the interior or energy?’ Yang went on. “I’ll be like, ‘Sam Hinkie is going to figure it the [expletive] out.’ So this will be my pledge, if the Yang administration comes to pass, will have Sam Hinkie in a position of major authority.”

Yang, an entrepreneur and ex-corporate lawyer, mounted an unsuccessful bid for the Democratic presidential nomination in this year’s election. He is still only 45 years old though, so future presidential runs seem very much in play.

As for Hinkie, whose controversial “Process” saw the Sixers purposefully sell off assets and focus instead on earning high draft picks, he has largely laid low since resigning from his post in 2016. NBA executives do still contact him for advice however, and now it seems that Hinkie could have a future in giving advice at the Oval Office as well.

Mookie Betts is eligible to return to the Boston Red Sox after the 2020 season, and he appears to be fueling the fire with some recent social media activity.

Jared Carrabis of Barstool Sports noted on Sunday that the Los Angeles Dodgers outfielder had been ‘liking’ many of the Boston Red Sox’s posts on social media recently. Other users quickly chipped in with screenshots and funny reactions.

Reading can be hard pic.twitter.com/TlztAeLmVg

The Red Sox traded Betts, the former AL MVP, to the Dodgers in February as part of a multi-player deal that netted them Alex Verdugo and top prospects Jeter Downs and Connor Wong. Betts will be a free agent this offseason and won’t have quite as much time to bond with the Dodgers organization in the meantime due to the shortened season.

Some Boston players are even prepared to recruit Betts back to the team, so it is easy to see why his Instagram activity is creating such a stir in the fanbase. Deandre Ayton may have a new skill to display once play resumes in Orlando.

Addressing reporters on Sunday, Phoenix Suns coach Monty Williams said that the former No. 1 overall pick has been improving his three-point shot.

“I think he’ll be in his unique role with some 3s being thrown in there every so often,” said Williams, per Kellan Olson of Arizona Sports. “The one thing that DA does for us that no one else can do at that level is put pressure on the rim. That frees up so many guys, so I don’t want to take that away, but he has worked on his three-point range. He’s getting more arc on his shot. He’s been really diligent about getting lift with his legs and getting it up in the air.

“I’ve always told guys if you work on something with intention, you should do it in the game, so I want him to have confidence to do that,” Williams went on. “We’ve never held him back from shooting out there because we feel like he can and will be able to do that but we don’t want him to ever forget about his ability to dominate the box.”

After shooting 34.2 percent from three in college, the 21-year-old Ayton has attempted just seven triples in his NBA career, missing all seven of them. He is still putting up a healthy 19.0 points per game this season though thanks to a strong inside game and an effective midrange jumper.

Ayton, who normally plays center, has openly stated his belief that the 4 is his natural position. Letting the triples start to fly will be a great way for him to become a viable long-term option at that spot for Phoenix.

Report: Bol Bol could make debut for Nuggets in Orlando Bol Bol was perhaps the most polarizing prospect of the 2019 draft class, and now it may be time for him to finally show us what he has got.

Mike Singer of the Denver Post reported this weekend that there is a strong chance the Denver Nuggets big will play in the team’s upcoming scrimmages and could possibly make his NBA debut during the subsequent seeding games. Singer also notes that the 20-year-old Bol has been one of Denver’s standout players during practices in Orlando and may be used out of necessity since the team has a shortage of healthy players in the bubble.

Bol, the son of late NBA great Manute Bol, was originally projected to be a lottery pick in last year’s draft but slid to all the way to No. 44 overall after suffering a foot injury that ended his collegiate career early. A 52.0 percent three-point shooter in college at 7-foot-2, Bol possesses one of the more intriguing skillsets among NBA youngsters.

The Nuggets will resume play third in the Western Conference at 43-22, so the emphasis may be more on winning games than on developing Bol. That said, Bol is probably looking forward to ending all of the speculation about him. Michael Fulmer’s long-awaited return to the mound appears to be imminent.

The Detroit Tigers righty told reporters Saturday that he is ready to pitch out of the team’s starting rotation, per Anthony Fenech of the Detroit Free Press.

The 27-year-old Fulmer, an All-Star in 2017, missed the entirety of last season after undergoing Tommy John surgery on his throwing elbow. He avoided arbitration with the Tigers and will play out the 2020 campaign on a $2.8 million deal. Detroit has Fulmer under team control for two more years.

With fellow right-hander Jordan Zimmermann going on the 45-day injured list with a forearm strain, the return of Fulmer and his fiery personality to the Tigers rotation figures to be a warmly-received one in the shortened season. 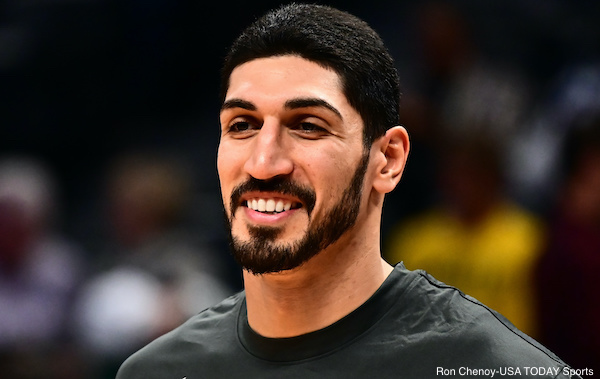 Enes Kanter is a very outspoken critic of the current regime in Turkey, and it has apparently cost him relationships with his fellow countrymen in the NBA.

In an interview this week on “The Bill Simmons Podcast,” the Boston Celtics big man said that he gets shunned by the other Turkish players in the league.

“What hurts me the most is other Turkish players in the league,” said Kanter. “We have Ersan Ilyasova, we have Cedi Osman, we have Furkan Korkmaz in Philly. Whenever we go against them, they don’t say a word. I actually try to talk to them. I’m like ‘Hey dude, what’s up? How you doing?’ No answer.

“Because they might be scared of the Turkish government that if they see a picture or a video of us talking or something, then they might be in trouble, whatever,” added Kanter. “So I actually cover my mouth with the jersey and just try to talk to them. They just turn their face the other way.”

The veteran Kanter also noted that he played with Ilyasova on the Oklahoma City Thunder as well as on the Turkish national team. Meanwhile, Osman and Korkmaz have played with Kanter’s brother on the national team as well.

Kanter has been a vocal opponent of Turkish president and de facto dictator Recep Tayyip Erdogan for many years now. As he alluded to, it could be that the aforementioned players are afraid of putting themselves or their family members who may still live in Turkey in danger by being seen with Kanter.

Given that Kanter’s father was only recently released from prison in Turkey, those concerns definitely seem to be legitimate, creating a tough predicament. Yoenis Cespedes’ health is the great unknown for the New York Mets after over two years out of the game, but manager Luis Rojas is sounding upbeat.

Rojas spoke about Cespedes’ progress on Friday ahead of the team’s upcoming exhibition games against the New York Yankees, scheduled for this weekend.

“We’re definitely getting more confident every time we see him out there,” said Rojas, per Tim Britton of The Athletic. He’s moving well. We’re hoping to put him in the outfield for one of the two games against the Yankees, and that will say a lot. Yankee Stadium has got a big gap, so moving around, and taking a first step off the bat, if he can play left there and get challenged, a few plays will say a lot to us.

“Every day he seems to move better,” Rojas added about Cespedes. “We’ve seen him on the bases, making turns, cutting angles. He’s done a good job. He’s done his homework as far as his progression and doing what he has to do with the performance staff.”

The 34-year-old Cespedes has not played since 2018 after undergoing surgery on both of heels, then subsequently fracturing his ankle in an accident on his ranch. Cespedes recently declared himself ready for Opening Day though.

The two-time All-Star has also been getting gassed up by his teammates, and the fact that the Mets are looking to give him time in the outfield despite the availability of the universal designated hitter has to be very heartening news.