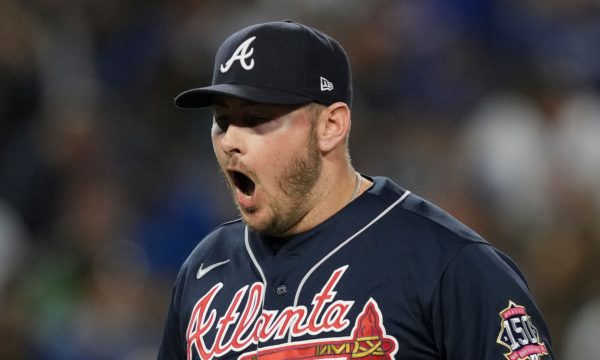 One Los Angeles Dodgers fan may need to seek medical attention for the burn that he got from Tyler Matzek this weekend.

The Atlanta Braves reliever Matzek posted a funny Thanksgiving-themed tweet this week about all the teams that the Braves ate up this year en route to winning the World Series.

@Braves What are we eating? @astros for the main, @Dodgers for the side and a cold @Brewers to wash it down?

When a Dodgers fan tweeted a dig about security not even knowing that Matzek played for the Braves, Matzek rolled up his sleeves and went in.

“True but you and all your Dodger friends do,” Matzek wrote in reply.

True but you and all your Dodger friends do.

Dodgers fans were definitely cursing Matzek’s name in the NLCS against the Braves. Matzek was excellent all throughout the series but really donned his superhero cape during the Game 6 clincher. Tasked with protecting a two-run lead in the seventh inning with two runners in scoring position and no one out, Matzek struck out all three batters that he faced. He then came back out for the eighth inning and retired the side on seven pitches.

The fan was smart to reference the incident where Matzek got roughed up by security at the Braves’ parade. But Matzek was even smarter to reference his back-breaking performance that no Dodgers fan will forget for a long time.