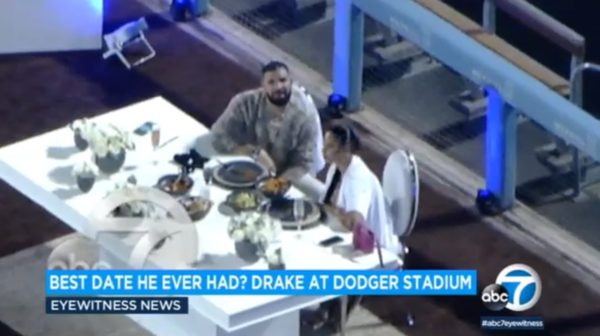 Rapper Drake went all-out with a baseball-themed VIP date during the week.

Drake took Johanna Leia out on a private date at Dodger Stadium Thursday night. The Los Angeles Dodgers were away at Miami that day and began a homestand against Arizona the following night, leaving the stadium available.

With the stadium available, Drake took advantage by arranging a dinner in front of the home dugout. He and Leia were captured by ABC 7 cameras sitting next to each other at a table, with a server standing at a private stand nearby. Both of them had custom Dodger jerseys for the occasion.

.@DRAKE ON A DATE? Randomly just flew over this cozy couple enjoying a private dinner along the third base line at an empty Dodger Stadium from #Air7HD @ABC7 #Drizzy pic.twitter.com/SjMR1UOgbo

ABC 7 reported that Drake made a sizable donation to a Dodgers charity to make the date happen.

Leia, 40, is the mother of Amari Bailey, who is a highly-touted basketball prospect. Bailey plays on Sierra Canyon’s basketball team with Bronny James, the oldest son of LeBron James.

That’s a pretty nice VIP date and not too bad if you can arrange it.