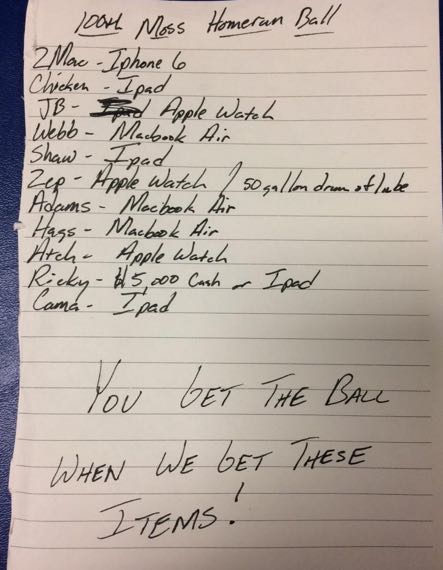 Cleveland Indians outfielder Brandon Moss belted the 100th home run of his career on Tuesday night, but he made the mistake of hitting it into his own team’s bullpen.

Had Moss’ homer gone into the opposing bullpen, a Kansas City Royals player or coach probably would have just returned it to him. His own teammates, on the other hand, wrote out a list of lofty demands.

Our bullpen caught Moss' 100th home run ball. They delivered this ransom note to Brandon after the game. #Windians pic.twitter.com/qD0d98Un9k

That’s a whole lot of Apple product Moss needs to get his hands on if he wants to keep his milestone ball. The Royals may have started a fight over the ball given their reputation, but a bench-clearing brawl might be more manageable than that ransom list.

In case you were wondering, “Zep” is Indians reliever Marc Rzepczynski. What he intends to do with a 50-gallon drum of lube, we have no idea.