Jose Reyes says he feels bad for the Mets, wishes they tried to keep him 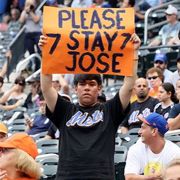 As if things weren’t tough enough for the New York Mets and their fans, they have now become a charity case. It’s one thing to be made fun of. It’s another for people to feel badly for you. According to the NY Post, Jose Reyes is disappointed his days with the Mets ended the way they did and feels sorry for the organization.

“I understand it’s a tough situation for the organization,” Reyes said. “What they’re going through isn’t easy and that’s why I was hurt at the beginning. But with the problems they have, I get it. I feel bad for them.

“At least come to me and say, ‘This is what we have.’ Make a push. Even if it’s not what I’m looking for, show me you still want me.”

Rather than offer Reyes something the Mets knew he wouldn’t accept, they chose to let him walk without even attempting to retain him. The fact that he feels sorry for the team because of their situation should be even more of a slap in the face to Mets fans than their team not having the money to keep him. New York has typically been a player in free agency over the past several years (see Beltran, Carlos), but the only person who made a serious effort to keep Reyes was Jerry Seinfeld.

If there are any Mets fans left out there, I’m curious: Would you rather have your team spend a ton of money and shower you with false hope or just let your superstars walk and let you down easy?