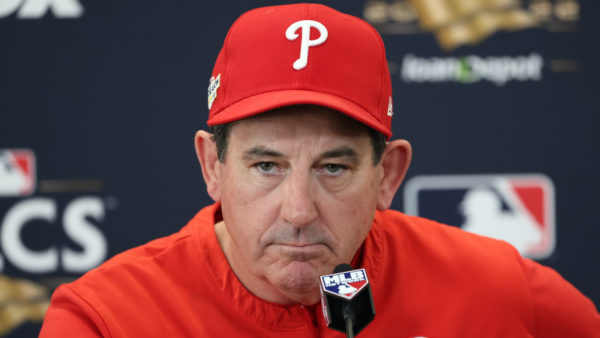 The Philadelphia Phillies lost Game 6 of the World Series 4-1 on Saturday night to end the series, and the team’s fans can thank Rob Thomson for making a brutal move to cost the team.

Thomson made a pitching change that helped the Houston Astros blow open the game in the sixth inning.

Starter Zack Wheeler entered the sixth having allowed just two hits and a walk against Houston. The game was scoreless. But then he hit Martin Maldonado with a pitch, got an out on a fielder’s choice, and allowed a hit to Jeremy Pena.

With runners on the corners and one out, rather than stick with Wheeler who had gotten Yordan Alvarez out twice, Thomson made a change.

He went with the lefty-lefty matchup and brought in reliever Jose Alvarado. Alvarez promptly punished the Phillies for the maneuver with a monstrous 3-run home run.

Houston added another run to make it 4-1 and that was all she wrote.

Thomson was asked after the game about his decision to pull Wheeler.

“I thought Wheeler still had really good stuff. It wasn’t about that. I thought that the matchup was better with Alvarado with Alvarez,” Thomson said.

“He still had his good stuff. I just thought that that was a key moment in the game and that was a momentum swing. I thought Alvarado had a chance to strike him out.”

What was missed from the analysis is that there was little advantage to going with Alvarado.

Alvarez hits lefties equally well as righties. This season, Alvarez hit .321 in the regular season against lefties compared to .299 against right-handers. He had a .998 OPS against lefties. Having him face a southpaw was not a disadvantage.

Thomson showed no trust in his starter, and apparently didn’t hear the same advice Dusty Baker had once received.