ESPN published a report Wednesday detailing accusations that the Toronto Blue Jays were stealing signs. They cited four players who told them about the Blue Jays’ methods for stealing signs. According to the players, the Jays had a man dressed in all white sitting in the center field seats. The man would put his hands on his head when the pitch was something other than a fastball. Having this information would eliminate some of the guess work that goes into hitting at the Major League level and provide an advantage at the plate.

Blue Jays GM Alex Anthopolous dismissed the claims saying they’re stupid and that there is no truth to it. Catcher J.P. Arencibia and former CF Vernon Wells laughed off the report. Right fielder Jose Bautista dismissed the report and confirmed it was the White Sox who had made the accusations detailed by ESPN.

Thanks to the detective work of Steal of Home, we are confident the game in question has been identified. On April 13th, 2010, the Chicago White Sox believed the Toronto Blue Jays were stealing signs. Here’s what happened that game.

The Blue Jays won 4-2 scoring two runs in the third and two in the fifth. They had nine hits in the first five innings off starter Gavin Floyd. In the 5th inning, catcher John Buck hit a ground-rule double with two outs.

Buck’s hard-hit ball left the White Sox’s television crew gushing. “That ball was hit so hard,” they raved. “It was just tattooed. John Buck’s having quite a series. He’s swinging the bat as well as he’s swung it in a long time.”

Shortly after Buck’s blistering double, Chicago’s pitching coach came out for a mound visit. That’s when it appeared as if Floyd and catcher A.J. Pierzynski were informed of the sign stealing in center. In the picture below, you can see Pierzynski glance out towards center field. 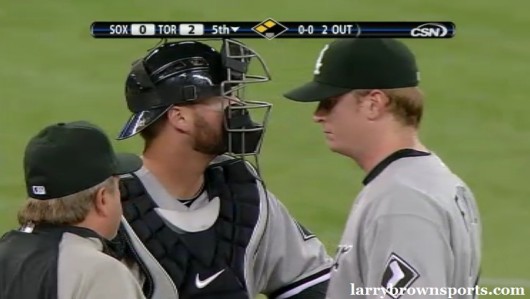 Shortly after more of the conversation took place, all three men look out towards center field. Edwin Encarnacion ended up driving in both runs with a double putting the Jays up 4-0. After that inning, the White Sox began using multiple signs for all batters, regardless of whether or not runners were on base. The Blue Jays went 1-for-9 with three strikeouts after the Sox made their adjustment.

It’s pretty obvious that Toronto had much more success before the White Sox began mixing up their signs, so that seems to support the accusations that the Blue Jays were stealing signs. Chicago wasn’t the only team to feel that way.

ESPN’s report points out that last September, the Yankees used multiple signs even with the bases empty. In a June game in Toronto this season, Red Sox catcher Jarrod Saltalamacchia did the same. Last month, Yankees manager Joe Girardi accused the Blue Jays of stealing signs.

It’s no surprise the Blue Jays denied the accusations. What were they going to do, admit that they cheat? Plus, it’s quite possible for the Jays to have arranged this without the GM knowing. Additionally, if you want to bring numbers into the argument, just knowing whether or not a fastball is coming does not guarantee you a hit. Justin Masterson throws almost exclusively fastballs. Mariano Rivera throws almost exclusively cutters. Both pitchers are still difficult to hit.

Regardless, knowing whether a fastball or off-speed pitch is coming presents a major advantage for a hitter. When Jose Bautista had his breakout year last season, I repeatedly noted to my friends how much of a dead fastball hitter he seemed to be. If he knew fastballs were coming, that would make it easier to crush the ball. Obviously you can’t say stealing signs is the reason he had a breakout year, but if they did it some of the time, it certainly would have helped.

The suspicions of the White Sox coupled with the actions of several other American League teams makes for a convincing argument that the Blue Jays had a setup going to try and steal signs. Hey, the Patriots were caught videotaping opposing teams’ signals. Why is it so hard to believe Toronto did this? Not everyone in the organization had to know about it. They also could have been discreet, picking and choosing when they did it. I can believe it happened. What about you?