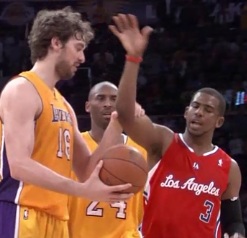 The Lakers beat the Clippers Wednesday night at Staples Center 96-91 and things were testy. Six technical fouls were assessed and much more trash talk was exchanged. The teams even were at it after the game.

Chris Paul, who returned from a hamstring injury to dish 12 assists, was pretty livid about losing. You could see him mouthing to Kobe after the game that Pau Gasol was soft. The Spaniard’s reaction was to pat the point guard on the head, leaving Paul fuming even more.

“I don’t like that…don’t touch top of my head like I’m one of your kids,” Paul said, according to Lakers reporter Beto Duran.

Pau was apologetic, saying “Sorry [he] feels that way. Do that all time w teammates…nothing mean about it. But is what it is.”

Gasol had 23 points, 10 boards, and got the win. Seems like Paul was just salty about the defeat.