DeMarcus Cousins ejected at halftime for cursing at referee (Video)

DeMarcus Cousins was ejected at halftime of the Sacramento Kings’ 98-91 overtime loss to the Utah Jazz on Monday for reportedly cursing at a referee. The ejection did not come while the actual game was in play, but at halftime. Halftime. You can’t make this stuff up.

Cousins was called for a technical foul with 2:23 left in the half. He tried approaching a referee as soon as the second quarter ended to find out why he got the tech, but things did not go well.

Here’s Cousins’ explanation of what happened, via Jason Jones of The Sacramento Bee:

“[The referee] said the same thing … he was saying, ‘Don’t talk to me.’ So my response was, ‘You don’t have to act like an effing female.’ I shouldn’t have said that. That’s about it.”

No, DeMarcus, you definitely should not have said that. His remark resulted in his second technical foul of the game — which leads to an automatic ejection — giving him a league-leading 12 techs on the season.

Cousins had 10 points and six rebounds in the first half, so his absence definitely hurt the Kings the rest of the game.

“When DeMarcus went out, that was huge for us because he was active, he was really active early on,” Jazz guard Randy Foye said.

Cousins clearly has a problem. When he’s not getting tossed by referees, he’s getting benched by his coach. And he’s even complained this season about referees cursing at him. There is an obvious common denominator to all these issues.

Chest bump to Eye on Basketball 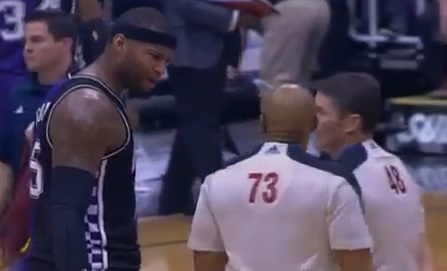