Hackers, or, in this case, angry Boston Celtics fans, went to work on Doc Rivers’ Wikipedia page minutes after news of his trade to the Los Angeles Clippers was released.

Some Clippers fans saw the page being hacked and responded with a jab to the Celtics: 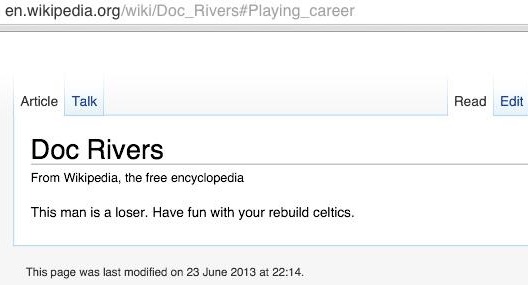 The Clippers fan then went full-on message board mode and did an “in your face” to the rest of the league:

Boston fans weren’t about to let that nonsense continue. One in particular hijacked Rivers’ Wikipedia page, threw back in the line about Doc being a loser, declared the coach an adult film actor, and tossed in a shot at his son, Austin, for good measure.

Weird, man. That nonsense only lasted for a few minutes before Wikipedia reclaimed control of the page and got it back to normal again.

Sorry to disappoint, Clips fans, but the Clippers aren’t winning the title next season, even with Doc and KG. And the Celtics aren’t exactly rebuilding, but the future doesn’t look great for them.

Thanks to Adam for the tip