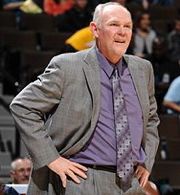 The Orlando Magic may have some top coaches on the horizon as potential replacements for Jacque Vaughn.

Vaughn was fired Thursday amid a 10-game losing streak and three poor seasons as head coach of the Magic. Former Magic player Scott Skiles was immediately mentioned as a candidate for the job. Mark Jackson and Mike Malone may also receive consideration.

Another former head coach to keep an eye on is George Karl, who is interested in the position.

One name to watch is George Karl. Sources didn’t mention him as a target for the Magic initially, but I’m told that Karl would have interest in coaching Orlando and possibly joining the team midseason. In 2005, he took over the Denver Nuggets midseason and they went 32-8 after he got the job (which is the best record for a coach who has taken over a job midseason).

Karl had previously said he’d prefer a job out West, but sources say he would be interested in the Magic since they’re an attractive team with their youth and talent.

Karl, 63, was fired by the Nuggets after the 2013 season despite leading the team to a franchise-best 57-win season. He is one of the better coaches in recent NBA history and no doubt would improve the Magic.

Karl even seemed to indicate interest in the job by toying with Magic fans over Twitter Thursday and saying the Magic are “loaded with young talent”:

“@NickTheQuick224: Come save us Karl! We're loaded with young talent they just need some guidance!”<-Definitely some great young talent!

He is definitely campaigning for the job. If I’m Orlando, he’s definitely the guy I want to hire. He is easily the best coach on the list.