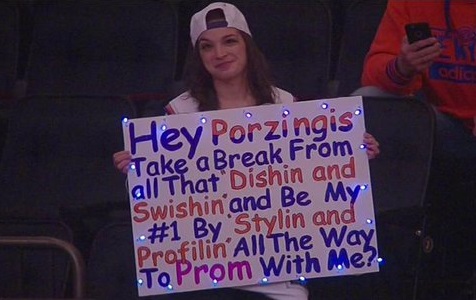 The fan, 17-year-old Samantha Miller, put together a poster in Knicks orange and blue colors asking Porzingis to her prom at Miller Place High School:

“I have been planning this for a little more than a month,” Miller told ESPN. “I’m a huge fan of the Knicks and KP. I watch every game, so I wanted to bring him to prom with me, since I didn’t go to my junior prom due to being bullied by some boys.”

Miller is clearly a huge Knicks fan, as this photo she posted to her Twitter account will attest:

Okay I've been planning this for a while.. Serious question @kporzee Will you go to prom with me? #KnicksonMSG pic.twitter.com/tr2pl5yZT4

Porzingis said after the game that he saw the sign (Ace of Base style) and would be recording a video message for Miller soon. He posted a video response on his Twitter account Saturday:

It’s too bad that he won’t be going. This would have been a great PR opportunity for him. We hope he reconsiders.