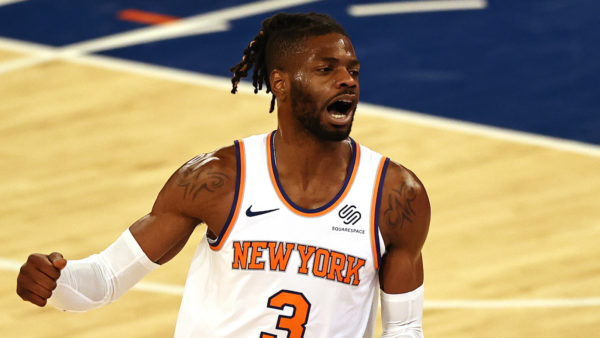 The New York Knicks are looking to free up some salary cap space for the start of the NBA’s free agency period, and the team has apparently thought about dealing one big man in order to do so.

On Tuesday, HoopsHype’s Michael Scotto reported that the Knicks have had “exploratory discussions” around trading center Nerlens Noel to the Los Angeles Clippers. Scotto also said that, according to HoopsHype salary cap expert Yossi Gozlan, the Knicks could create up to $24.5 million in cap space by trading Noel if they don’t have to take on any additional salary in a deal.

Noel is set to make $9.24 million next season with a $9.68 million team option for the 2023-24 season. The Clippers could take Noel’s salary on due to the $9.7 million trade exception they got after trading Serge Ibaka to the Milwaukee Bucks last season.

Freeing up $24.5 million could help the Knicks successfully pursue one notable free agent that they are reportedly all-in on.

Noel initially signed with the Knicks prior to the 2020-21 season. In 64 games, he averaged 5.1 points and 0.7 assists per game, but made key defensive contributions for the Knicks on their way to earning the fourth seed in the Eastern Conference playoffs. The 28-year-old averaged 6.4 total rebounds, 1.1 steals and 2.2 blocks per game. Noel re-signed with the Knicks prior to last season, but only appeared in 25 games due to injuries. He averaged 3.4 points, 5.6 rebounds and 1.2 blocks per game.