The 2006-07 Golden State Warriors pulled off what is still one of the most impressive feats in NBA history, and the stories we have heard about that team only make the legend grow. The latest, told by former NBA swingman Matt Barnes, is nothing shy of epic.

Barnes and former teammate Stephen Jackson spoke with Arash Markazi of the Los Angeles Times about their new video podcast “All the Smoke,” and Barnes said he is considering doing a documentary on the “We Believe” Warriors. That team entered the postseason as a No. 8 seed and defeated the No. 1 seed Dallas Mavericks in six games, becoming just the third eighth-seeded team in NBA history to eliminate a first-seeded team. As you might expect, they celebrated accordingly.

Barnes told Markazi the team partied after Game 6 at former Warriors coach Don Nelson’s penthouse. When they got to the place, Nelson told the players that Woody Allen (we assume Barnes meant Woody Harrelson since the actor and Nelson are friends) was in the back rolling joints and to go join him. The guest list included Snoop Dogg, Jessica Alba, Owen Wilson and Kate Hudson. Barnes said the team went from Nelson’s penthouse to Snoop’s hotel and “blew it down.” Here’s more:

Matt Barnes told me he’s thinking of doing a documentary on the “We Believe” Golden State Warriors. The opening scene would be from the party after they upset the top seeded Dallas Mavericks in the first round. pic.twitter.com/vWoFLp9hRb

Knowing all that, it’s hardly a surprise that the Warriors lost to the Utah Jazz in just five games in the second round. They partied like they won a title after the big upset, and you can’t really blame them.

Barnes and Jackson have already shown us that “All the Smoke” is going to produce some great content. If we can get more party stories like that about one of the most beloved teams in Warriors history, it will be well worth a listen. 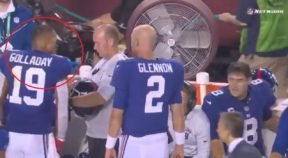