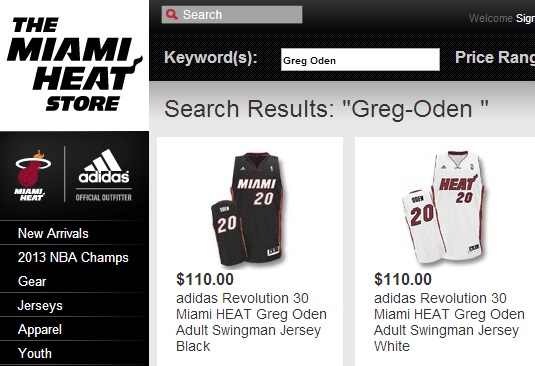 I have to admit, it was pretty cool seeing Greg Oden play in an NBA game, albeit a preseason one, for the first time since 2009. It was thrilling, it was nice to see him back in a game after all he’s been through, and you could tell his Miami Heat teammates were stoked for him. But one group got a little too excited about Oden’s debut: the people running the Heat’s Twitter account.

While Oden was making his preseason debut for the Heat, the team’s Twitter account was trying to push sale of his gear in the team store.

RT @MiamiHEATstore: Don't miss your chance to get your Greg Oden gear! http://t.co/QXdGxXuQgG

That link took you to a specific page of Greg Oden gear in the team’s online shop.

I guess they had to act fast knowing Oden’s season could end at any time because of another knee injury, but sheesh, maybe wait two games before we start pushing all his gear?

By the way, are we really charging $110 for the jersey of a guy who probably won’t last a month? I think a better investment would be renting an Oden jersey for $20 per game he plays. You’ll still probably come out ahead.