Russell Westbrook reveals what Utah Jazz fan said to him 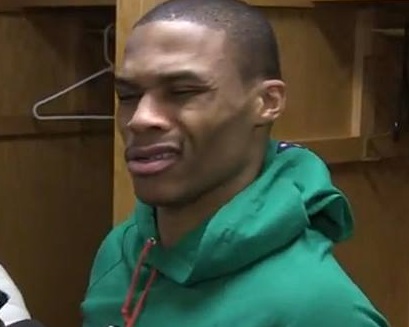 There are always two sides to a story, and now we’re hearing both sides of what happened between Russell Westbrook and a Utah Jazz fan that led to a video that went viral on Monday night.

A video of Westbrook threatening to f— up a Jazz fan and his wife circulated after the Thunder’s win at Utah on Monday night. The video did not have context and only showed Westbrook’s threat to the fan.

After the game, the Oklahoma City star provided a statement to explain what happened from his point of view. He says the Jazz fan told him to get down on his knees like he’s used to.

Russell Westbrook made a statement and did not take questions tonight. Here’s all of the statement I can fit into one Twitter vid: pic.twitter.com/EQA3A4jaQQ

Westbrook said that he found the comment to be “disrespectful,” “inappropriate,” and “racial.”

Westbrook lamented the lack of protection for players from inappropriate fans.

“There’s gotta be something done, there’s gotta be some consequences for those type of people that come to the game just to say whatever they want to say,” Westbrook said. “I don’t think it’s fair to the players. If I had to do it over again, I would say the exact same thing.”

Westbrook also said he never has nor never will put his hands on a woman. What led him to say he would f— up the wife too was her repeating what her husband had said.

Here’s fan Shane Keisel’s side of what happened. He said he did not curse, though he acknowledged that what he said would not be appropriate to share on TV. He seemed to provide context for his remark, saying he was jabbing Westbrook about having wraps on his knees late in the game, and he said the two were having an exchange.

Shane Keisel, the Jazz fan who was involved in a verbal altercation with Russell Westbrook during the Jazz loss to the Thunder, explains his side of what happened. @KSL5TV @kslsports #nba pic.twitter.com/ScCSRttTCg

Both parties were inappropriate and out of line. Heckling is part of sports, but Keisel crossed a line with his remark telling Westbrook to get on his knees. Westbrook also went too far in his response, because players should not be threatening fans and making them feel unsafe to attend events.

The Jazz have issued a statement saying they are investigating the exchange.

The Jazz released this statement via text. pic.twitter.com/zHEJ4Ka6O3