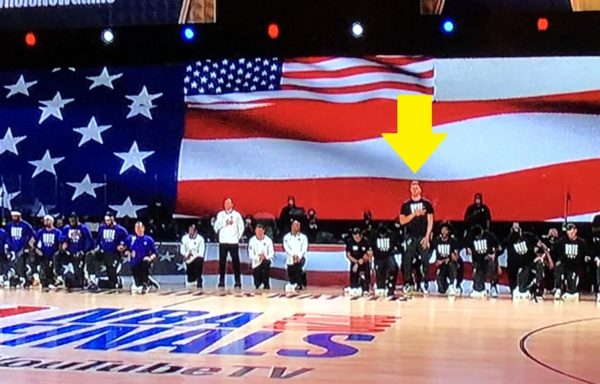 The NBA has become so focused on social justice issues that standing for the national anthem makes one an outlier. That was the case for Meyers Leonard on Wednesday night.

When the national anthem was played prior to Game 1 of the NBA Finals at Disney World in Lake Buena Vista, Fla., Leonard was the only player who stood. Referee Kane Fitzgerald was the only other person along the front row who stood.

Standing for the national anthem has been recommended by the law since 1942, but many athletes have defied this tradition. Colin Kaepernick started the kneeling trend during the 2016 NFL season. Though the NBA had a rule saying players must stand for the anthem, the league has changed its stance. Since the resumption of the season this year, multiple NBA players have kneeled for the anthem.

Leonard, who is a reserve for the Miami Heat, said early on in the NBA Bubble that he would be standing for the anthem. His brother joined the Marines in 2008, feeling it was his duty to serve his country ever since the 9/11 tragedy. Meyers feels like he is honoring his brother and those who serve in the military when he stands.

Leonard said at the time that he agonized over the decision because he did not want it to seem like he was against his teammates or like he didn’t understand their position.

“Some of the conversations I’ve had over the past three days, quite literally, have been the most difficult,” Leonard told The Associated Press in August. “I am with the Black Lives Matter movement and I love and support the military and my brother and the people who have fought to defend our rights in this country.

“I am a compassionate human being and I truly love all people. I can’t fully comprehend how our world, literally and figuratively, has turned into black and white. There’s a line in the sand, so to speak: ‘If you’re not kneeling, you’re not with us.’ And that’s not true. I will continue to use my platform, my voice and my actions to show how much I care about the African American culture and for everyone,” he added. “I live my life to serve and impact others in a positive way.”

Leonard believes that you can be both respectful of the national anthem and everything the flag stands for, while also supporting those who kneel.

Having known @MeyersLeonard for years, can say he doesn’t have prejudice bone in his body. He agonized, cried at times about not kneeling with teammates. His brother served in Marines, so it was a painful decision. I asked him if he still views kneeling as disrespectful to flag: pic.twitter.com/02YzUUtw3R

Leonard, 28, is in his first season with the Heat after beginning his career in Portland. He averaged 6.1 points and 5.1 rebounds per game this season. Leonard was traded to Miami as part of the Hassan Whiteside deal. His wife had a funny response for Whiteside after the trade.

Aaron Rodgers answers how he feels about Jordan Love playing

Aaron Rodgers spoke with reporters on Wednesday and answered how he would feel about the possibility of Jordan Love playing this season for Green Bay. Rodgers has been dealing with a broken thumb since Week 6 and now has a…

One of Kyler Murray’s former Arizona Cardinals teammates does not seem to have a terribly high opinion of the quarterback. Longtime Cardinals cornerback Patrick Peterson had a brutal take on Murray during his “All Things Covered” podcast with Bryant McFadden.…

Shaquille O’Neal and Charles Barkley went a combined 0-for-2 on the air this week. On Tuesday’s episode of TNT’s “Inside the NBA,” O’Neal, Barkley, and the rest of the crew were debating the All-Star case for Oklahoma City Thunder star… One Kansas City Chiefs player appears to be poking the bengal ahead of Sunday’s showdown. Chiefs safety Justin Reid spoke with reporters on Wednesday and addressed his team’s coming matchup against the Cincinnati Bengals. Reid took a shot at Bengals…

The Brooklyn Nets have run into more injury issues with Ben Simmons. The Nets said Wednesday that Simmons, who left Monday’s game against Orlando, will miss at least the next three games with an upper calf strain. He will be…