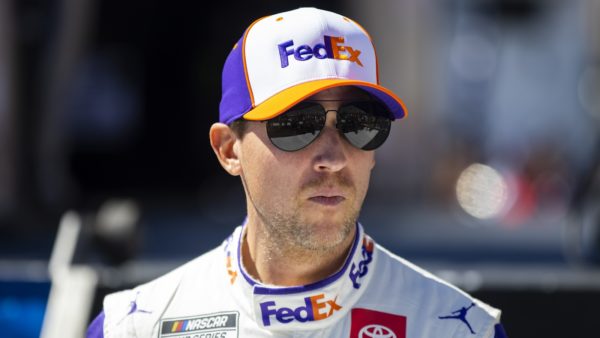 Denny Hamlin issued a warning to Ross Chastain on Sunday after an incident between them on the track during the NASCAR Cup Series race at World Wide Technology Raceway.

Chastain bumped Hamlin into the Turn 2 wall, resulting in a caution on lap 64. Hamlin responded by driving Chastain below the apron.

Later in the race, Chastain sent Chase Elliott into the wall. Elliott and Hamlin then tag-teamed Chastain over the No. 1 car’s driving.

Hamlin finished 34th in the race was not happy. He said that while he didn’t exact payback on Chastain Sunday, the day will come.

Denny Hamlin on Ross Chastain: "You only want to pay back when it counts. It's gonna have to be meaningful. It's gonna be on a meaningful day."

“Ultimately, the sport is self-policing. When you least expect it and when it means most is when it comes back around … it’s going to have to be meaningful,” Hamlin said of when his payback will come.

Denny Hamlin said when he pays back Ross Chastain, it will be meaningful and when he least expects it, that you have to “fence these guys hard” to get their attention.

More of what Hamlin said about Chastain after Gateway: pic.twitter.com/B0SCkCct6r

Chastain took ownership for the issues he caused on the track. But now he has to drive knowing that payback from Hamlin is coming one day.