Sean Avery messes with homeless people, puts it on Snapchat Retired NHL tool bag Sean Avery has found himself a new hobby — messing with homeless people on the street and sharing it on social media.

Avery took several videos of himself on Snapchat last week walking up to homeless people in New York and asking them if they know what time it is. Most of them were sleeping and minding their own business. Here’s a compilation video:

Cool, huh? When people came after Avery and accused him of harassing people who don’t deserve it, he fired back on Twitter with the actual definition of “harassment.”

Harassment (the act of systematic and/or continued unwanted and annoying actions of one party or a group, including THREATS and DEMANDS)

Next time someone asks me for the time while I'm standing on the street I'm calling the police….#Harrasement

“No comment, but if you tell me what street corner [Post columnist] Richard Johnson sleeps on, I will go wake him up,” Avery said. “Congrats to you for the powerful reporting you are doing. Continued success.”

Is it any surprise that this is the same guy who quit a Broadway show during production over a misunderstanding that had to do with a slice of pizza? This dude is the worst. Steven Stamkos is set to re-sign with the Tampa Bay Lightning in a move that, while slightly surprising, makes total sense for him.

TSN’s Bob McKenzie first reported that Stamkos would be staying with the team that drafted him No. 1 overall in 2008.

Stamkos's deal with TB is expected to come in at eight years, with an AAV of $8.5M.

Stamkos himself confirmed that he was sticking with the Lightning.

Excited to be back for 8 more years @TBLightning ! Here we go …..

This is, at first glance, a surprise. NHL free agency does not start until July 1, and it was widely assumed that Stamkos would at least test the market. He would have had any number of suitors, though the number of teams that really had the cap space to sign him was much lower than the number of teams that would have wanted him. The Toronto Maple Leafs, his hometown team, were widely expected to make a run at him. So, too, were the Buffalo Sabres. The Detroit Red Wings were also poised to enter the Stamkos sweepstakes after they managed to clear the contract of Pavel Datsyuk, who is going to play in Russia’s KHL, off their books. As recently as last Friday at the NHL Draft, Lightning GM Steve Yzerman didn’t sound optimistic about keeping Stamkos in the fold.

However, it’s a deal that makes total sense for both sides, particularly the player’s. Toronto and Buffalo had the cap space, but they’re both rebuilding projects that aren’t close to completion. Detroit, while an intriguing prospect, is a team that has had to squeak into the playoffs as a mid-tier franchise over the last several seasons. Stamkos joining would not have made them an instant contender either.

The fact is, no other team could offer Stamkos the supporting cast that Tampa Bay can. They were in the Stanley Cup Finals in 2015 and took eventual champions Pittsburgh to Game 7 in the Eastern Conference Finals in 2016 – basically without Stamkos, who only played one game in the playoffs due to injury. One can only wonder if Tampa Bay would have gotten past the Penguins with a healthy Stamkos in that series. There is a sense of unfinished business for Stamkos and the team, and it’s business that never would have been finished had he bolted for another team.

It may also seem like Stamkos took less money to stay in Tampa when he could have gotten $10 million a year elsewhere, but Florida’s lack of state income tax evens things out a bit. Financially and competitively, staying with the Lightning was the most reasonable option for Stamkos if he wanted to win a Stanley Cup. They’ll have to do some creative budgeting to keep guys like Nikita Kucherov and stay under the salary cap, but it’s still a very talented team that will now be ready to make another run at the Stanley Cup. 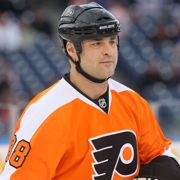 Eric Lindros was finally elected to the Hockey Hall of Fame as part of its 2016 class, ending a six-year wait to be inducted to Toronto.

The former No. 1 overall pick whose career was cut short due to concussions said he hasn’t stopped smiling since getting the call Monday.

Eric Lindros was with Mike Keenan earlier today. Got the call from the Hockey Hall of Fame on Highway 11. Kept driving while smiling.

Lindros played 13 seasons in the league, being elected to six straight All-Star games and winning a Hart Trophy all with the Flyers early in his career. Known for his combination of size, physicality and skill, Lindros also played for the Rangers, Leafs and Stars to close his career.

He got off to a rocky start by refusing to play for the Quebec Nordiques — a decision he still stands behind — but eventually proved his worth by winning the Hart Trophy with Philly. However, he never won a Stanley Cup, while the bounty the Flyers sent to the Nordiques franchise in order to get him helped create the Avalanche’s dynasty.

Lindros was one of the top players of his day and deserves the nod. Also part of his class are Sergei Makarov, Pat Quinn and Rogie Vachon. NHL legend Ray Bourque was arrested for driving while under the influence over the weekend, and the police report makes it clear he had no business being behind the wheel.

Bourque was arrested in Andover, Mass., after he rear-ended a minivan. He was charged with OWI and following too closely to another vehicle. According the The Boston Globe, police say Bourque’s blood alcohol level after the crash was .249, which is nearly three times the legal limit of .08.

Bourque reportedly told police he had “a few drinks” at the Andover Country Club before getting into his car. The arresting officers say Bourque smelled like alcohol, was unsteady on his feet and had slurred speech. Having a BAC that is nearly three times the legal limit will certainly do that to someone.

“I am not happy about the situation I put myself into on Friday night,” Bourque said in a statement.

We’ve told you about former athletes who were arrested with pretty high BACs (a good example here), but Bourque is definitely one of the highest. That’s nothing to be proud of. When Sidney Crosby was presented with the Stanley Cup after the Pittsburgh Penguins defeated the San Jose Sharks Sunday night, he skated around with it for a few moments before handing it off to defenseman Trevor Daley, a somewhat unexpected recipient.

As NHL.com’s Dan Rosen informed us, Crosby had a very good reason for passing the Cup to Daley first.

Crosby said he handed the Cup to Daley 1st b/c he told him after a visit home that his mom isn't doing well & she wanted to see him lift it.

Daley missed the final nine games of the playoffs with a broken ankle. His mother is battling cancer.

“It was pretty special,” Daley said of Crosby handing him the Cup first. “He’s a great player, but he’s an even better person. There’s not much more you can say about that guy. He’s a special guy.”

This was Daley’s first Stanley Cup in 11 NHL seasons. We wish him and his family the best as his mother fights cancer.

Though Sidney Crosby won the Conn Smythe Trophy for the Pittsburgh Penguins, you could very easily make the argument that the team’s HBK Line were the real postseason MVPs.

The HBK Line, comprised of Carl Hagelin, Nick Bonino and Phil Kessel, combined for 56 points in the postseason, including 11 during the Stanley Cup Finals. 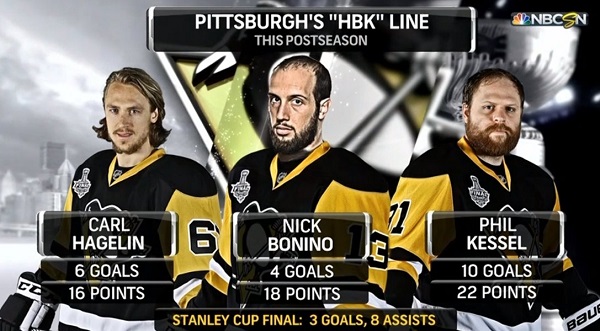 Who knew that Evgeni Malkin’s injury would lead to Bonino stepping in and making that line truly click? And let’s also give a ton of credit to GM Jim Rutherford, who acquired both Hagelin and Kessel within the last year. We’re big fans of Pittsburgh Penguins radio announcer Mike Lange, so of course we had to hear what his radio call of the Pens winning the Stanley Cup on Sunday sounded like, and it did not disappoint.

Take a listen to the final seconds as the Pens won it all:

“Get in the fast lane, grandma, the bingo game is ready to roll!” – classic Lange.

Lange, 68, has been calling Penguins games since 1975. You knew he would come through with a memorable call.