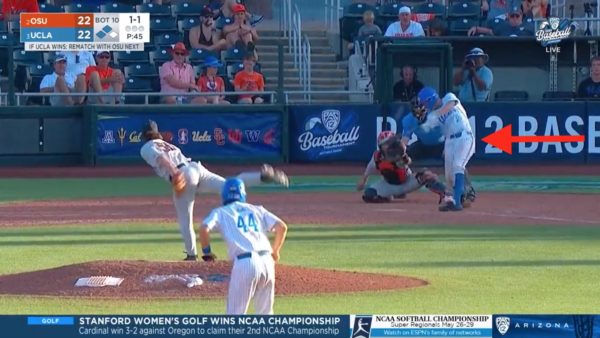 UCLA and Oregon State on Saturday played one of the craziest college baseball games of the year.

The Beavers had a comfortable 21-12 lead heading into the ninth inning, but the Bruins tied the game on four hits, three walks and a hit by pitch. Catcher Jack Hollman’s RBI groundout drove in the tying run to send the game to extra innings.

Oregon State took the lead in the top of the 10th, but the Bruins responded in the bottom half of the inning. After loading the bases, they scored on a balk to tie the game at 22.

With runners on second and third base and still no outs later in the inning, the Bruins completed their miraculous comeback in style.

Catcher Tommy Beres hit a walk-off, three-run home run over the wall in left field for the 25-22 win.

TOMMY BERES ENDS IT WITH A WALK-OFF BOMB!

Beres didn’t enter the game until the sixth inning, but still went 3-for-4 with seven RBI. The homer was the first of his career.

Well, that game had it all.

Per ESPN Stats & Info, the 47 combined runs in UCLA’s comeback win over Oregon State were the most scored in the over 8,000 Division I games this season.

UCLA’s win forced a second game between the two sides on Saturday night, with the winner advancing to play Stanford in the first-ever Pac-12 tournament championship game on Sunday.