Jalen Rose responds to Chris Webber: He ‘is delusional and still in denial’ 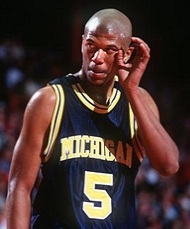 Jalen Rose heard all about Chris Webber’s passive-aggressive shots at him over the “Fab Five” documentary and responded Wednesday.

Earlier in the day, Webber, now an analyst for Turner Sports, joined “The Dan Patrick Show” and said he “wasn’t too thrilled” with the film, which was put together largely by Rose and the other three members of the Fab Five, Juwan Howard, Jimmy King and Ray Jackson. Webber said he was only given a call about participating in the film about a week before they were set to wrap. King disputed this claim, and so does Rose.

Webber also took some not-so-subtle shots at Rose by saying the former point guard was “Hollywood” and wanted to make the film all about himself.

Later on Wednesday, Rose responded to Webber’s interview with some comments to Larry Brown Sports.

“One dude traveled then called timeout. One dude lied to grand jury and hasn’t apologized. One dude tried to circumvent the documentary to HBO. One dude ignored multiple requests from everyone involved after agreeing to participate. One dude played like (President) Obama and sat in a suite during Michigan’s recent title game. One dude slandered Ed Martin after all he did for him and his family. One dude is not in contact with the other four (which is all good). One dude has been doing a rebuttal doc for four years. One dude clearly is delusional and still in denial,” Rose said of Webber in messages to Larry Brown Sports.

“Congrats on your amazing success! Respect had no price. Man up.”

Rose has spoken sternly of Webber in the past and has asked him to finally apologize to Michigan for taking money from booster Ed Martin and lying to the grand jury about it. If Webber does apologize, it would go a long way towards ironing out problems he has had with the school and his teammates since the whole scandal broke over 12 years ago.