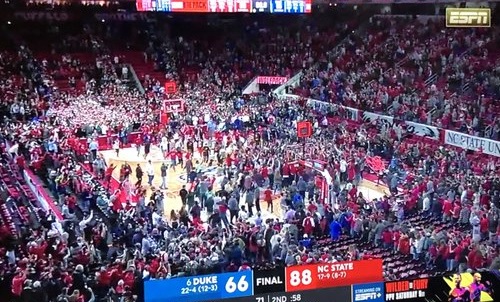 NC State absolutely dominated Duke in an ACC game on Wednesday night, and the home fans loved it.

The Wolfpack came up with an 88-66 win over the No. 6 Blue Devils to increase their chances of making the NCAA Tournament. As time was ticking down on the game, NC State fans were preparing to rush the court. When the game went final, they went crazy.

Take a look at the videos:

NC State pulls off the upset over No. 6 #Duke Markell Johnson 28 points & Devon Daniels with a career-high 25 points. @ABC11_WTVD 88-66 pic.twitter.com/TIIx8GCggZ

NC State is now 17-9 and 8-7 in conference. They still have five games remaining, including a rematch at Duke and a home game against Florida State. If they go 3-2 over their final five regular season games, they should be set for the NCAA Tournament.