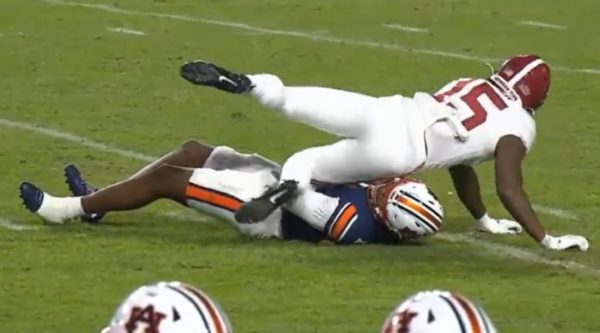 Alabama was called for a garbage roughing the passer penalty late in their Iron Bowl rivalry game against Auburn on Saturday.

Auburn was leading 10-3 and had a 3rd-and-7 at midfield with under seven minutes left in the game. Tigers quarterback TJ Finley threw an interception, but he was bailed out after a penalty was called on Dallas Turner for roughing the quarterback.

Roughing the passer or nah? pic.twitter.com/1AZoIwEsYF

In slow motion, it looks like Turner took an extra step to hit Finley unnecessarily. But in real time, you have a guy going full speed at a quarterback who just got rid of the ball.

What do you expect from a defender?

Calls limiting what defensive players can and cannot do have been getting worse and worse over the years. This is just another example of how limited defensive players are, and how much the game has tilted towards offenses and especially the passing game.

Bama ended up forcing a punt and getting the ball at their two. They would have had much better field position had the penalty not been called, allowing the interception to stand.