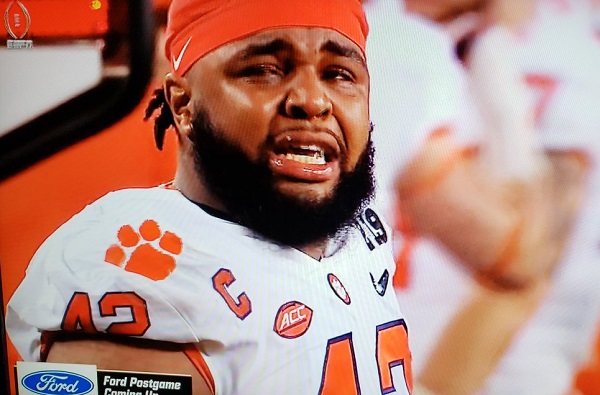 The emotions came pouring out of Christian Wilkins after his Clemson Tigers sealed their win over Alabama in the National Championship Game on Monday night.

The senior defensive tackle was shown crying on the sidelines, overcome by the satisfaction of winning another national title — and doing so in convincing fashion over the Crimson Tide.

I just love this “gentle” giant! #42 Christian Wilkins is a true scholar athlete—and he’s been a substitute teacher for the past year! pic.twitter.com/JEX5fD3YFS

Clemson went 55-4 over Wilkins’ four seasons, making the College Football Playoff all four times and winning two national championships. He returned to school rather than go to the NFL, all so he could win another championship trophy:

Get you someone who looks at you like Christian Wilkins looks at the #NationalChampionship trophy. pic.twitter.com/JCP26pk0zt

Not too bad for a substitute teacher.